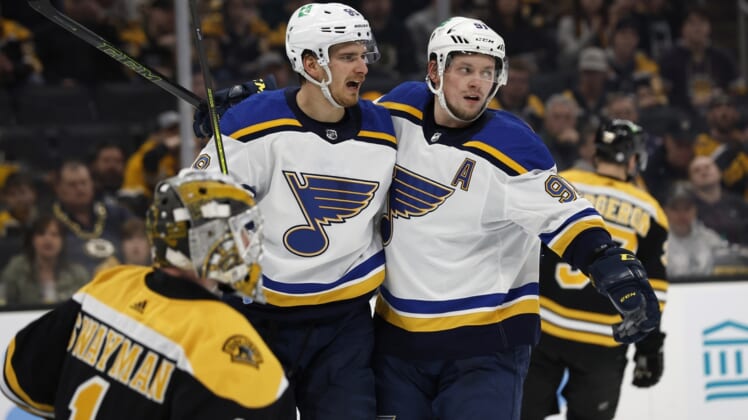 Tarasenko scored the eventual game-winner at 18:12 of the second period, highlighting his team’s two-goal frame. The team’s leading goal-scorer buried his second of the game and 28th of the season at 9:27 of the third.

David Perron and former Bruins defenseman Torey Krug both had a goal and an assist, while Pavel Buchnevich dished out two helpers for St. Louis, which is unbeaten in nine straight games.

Ville Husso made 39 saves to move his personal unbeaten streak to eight games.

Jeremy Swayman stopped 26 shots in the loss, the Bruins’ second straight and third in four games.

The game got off to a wild start as both teams scored in the first minute. First, Perron finished a backhand shot on a two-on-one with Ryan O’Reilly to lift St. Louis at the 34-second mark.

Just 15 ticks later, Bergeron slotted home a one-time shot to tie the game at 1-1. Brad Marchand beat his defender to a loose puck and slid it to the Bruins’ captain, who scored his 20th goal.

An offside call overturned what was originally Krug’s go-ahead goal for St. Louis with 4:22 left in the opening period. Just 1:21 later, McLaughlin buried Erik Haula’s centering pass to give Boston its first lead.

Krug scored a tying goal that counted with 4:50 to play in the second. On the power play, he cut through both Bergeron and Marchand between the hashes and beat Swayman over his stick-side shoulder.

Tarasenko gave the visitors a 3-2 lead at 18:12 of the middle frame. After Robert Thomas forced a turnover at the defensive blue line, he rushed up ice with Buchnevich and spun for a shot that beat Swayman high.

The Blues cushioned their lead 9:27 into the third as another giveaway turned into a three-on-one rush. Tarasenko buried Buchnevich’s quick feed

Bruins defenseman Brandon Carlo didn’t play after the first period and did not return. His injury was not disclosed.