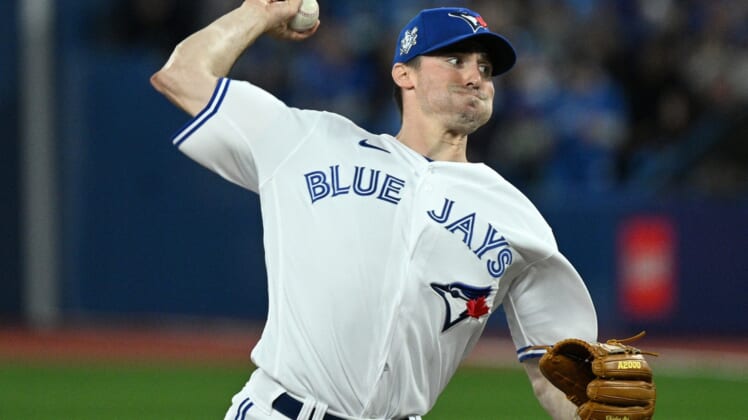 Vladimir Guerrero Jr. hit his fifth homer of the season in the first inning and the Toronto Blue Jays went on to defeat the visiting Oakland Athletics 4-1 Friday night.

Guerrero was 2-for-3 with an intentional walk in the opener of the three-game series. Lourdes Gurriel Jr, added two hits, including an RBI double, Zack Collins had two hits with an RBI single, and Raimel Tapia also had two hits.

Toronto starter Ross Stripling allowed no runs and two hits with no walks while striking out three in four innings. The win went to Adam Cimber (3-0), and Jordan Romano pitched a perfect ninth inning to earn his fifth save of the season and his 28th in a row dating to last season.

Toronto widened its lead to 2-0 in the second inning when Tapia singled and scored on Santiago Espinal’s double.

Trevor Richards replaced Stripling in the fifth and pitched around a two-out single.

After giving up a single in the bottom of the fifth, Jefferies was replaced by Justin Grimm.

Toronto’s Tim Mayza allowed two singles in the sixth before Cimber replaced him with one out to face pinch hitter Chad Pinder, who hit an RBI single.

Grimm allowed a single and a walk to start the bottom of the sixth. Sam Moll replaced him and induced a double-play grounder from pinch hitter Alejandro Kirk. Espinal was intentionally walked, but Collins hit an RBI single.

Oakland’s Zach Jackson allowed a run in the seventh on doubles by George Springer and Gurriel. Jackson also surrendered two walks (one intentional). Adam Kolarek took over and got the final two outs with no other runs scoring.

The A’s placed catcher Austin Allen and relievers A.J. Puk and Kirby Snead on the restricted list on Friday, and outfielder Stephen Piscotty went on the COVID-19 list.