Without a doubt, the former two-division champion Aung La Nsang is partial to Vitor Belfort. The two have trained together for some time. However, “The Burmese Python’s” prediction is less based on friendship, and what he has felt firsthand from sparring with the 44-year-old Pride Fighting Championship alum.

Before a bout was ever booked between De La Hoya and Belfort, “The Phenom” was set to make his boxing debut against a very different opponent. That being, animal handler and social media personality, “The Real Tarzan” Mike Holston. The matchup was set for the undercard of the June event promoted by Triller and headlined by Teofimo Lopez against George Kambosos, Jr. However, the fight and event were postponed after Lopez tested positive for COVID-19.

Eventually, with few good options for the former multi-division boxing champion materializing, De La Hoya and Vitor Belfort were paired up by Triller matchmakers instead. 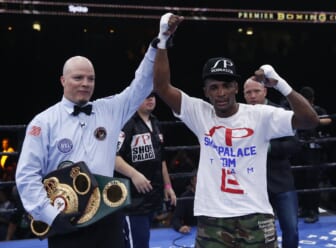 There are certain reasons why, despite “The Golden Boy’s” boxing acumen, that Belfort has a chance to beat his 48-year-old opponent. One is that he is the younger of the two by four years. Another being that the fight will take place at 180-pounds.

Twenty pounds heavier than the highest weight De La Hoya ever competed at in boxing. Yet as Nsang told MixedMartialArts.com, after being Belfort’s primary training partner for his fight against Holston, his teammate’s strong chances of winning are based around a stout chin and serious punching power.

“I sparred with him before I signed this contract [to compete at ONE Championship: Battleground]. He was supposed to be fighting. I was his main training partner for that boxing fight. He’s got power and he can take a shot. I didn’t go easy on him because he’s 44-years-old,” Nsang told the site. “He actually tried to knock me out, and I did too. He’s got a chin, and if you’re a betting man, I would put all your money on Vitor.”

De La Hoya’s final fight before retiring was a 2008 technical knockout loss to another legend of the sweet science in Manny Pacquiao.

Belfort has not competed in combat sports since a 2018 knockout loss to former UFC light heavyweight champion Lyoto Machida at UFC 224.

Vitor Belfort vs Oscar De La Hoya will take place on September 11, inside the Staples Center in Los Angeles, California. The event will be broadcast on FITE TV pay-per-view