Virginia’s balanced attack too much for Syracuse 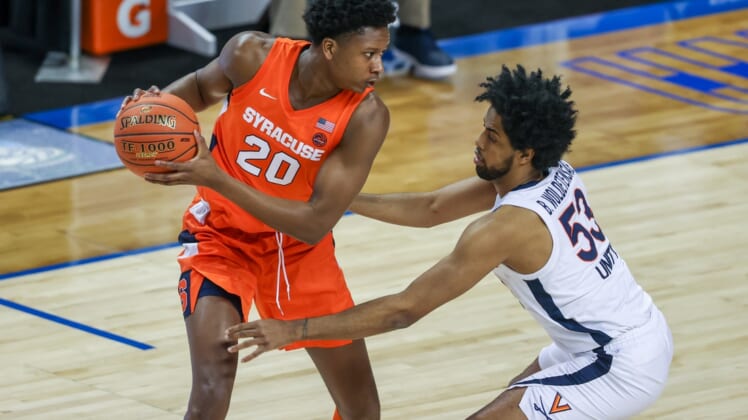 Behind a clutch double-double from Kadin Shedrick and three other players who scored in double figures, Virginia defeated host Syracuse 74-69 in ACC play Saturday.

A 9-2 Virginia run midway through the second half provided a little bit of separation in what was a tight game, and the Cavaliers (8-5, 2-1) held on to the lead down the stretch.

Syracuse (7-6, 1-1) pulled to within three points at 72-69 in the final minute and had an opportunity to tie the game, but Cole Swider missed a 3-pointer and Virginia secured the rebound. The Orange then fouled Kihei Clark, who knocked down both free throws to make it a two-possession game and clinch the victory.

Virginia’s leading scorers were Armaan Franklin and Clark with 17 points apiece, but it was a balanced scoring effort across the board. Jayden Gardner scored 15 points, and Shedrick had 12 to go along with 11 rebounds.

Syracuse had more of a top-heavy offensive game with its top two scorers accounting for more than half of the points. Buddy Boeheim led the way with 27 and his brother Jimmy scored 18. Eight missed free throws (15 of 23) proved to be costly for the Orange.

Virginia shot 30 of 57 (52.6 percent) from the floor and knocked down seven 3-pointers to go with 22 assists and just nine turnovers in an efficient offensive performance.

Clark led the game in assists with eight, and Shedrick was the only player for either team to reach at least 10 rebounds, although Buddy Boeheim led Syracuse with nine.