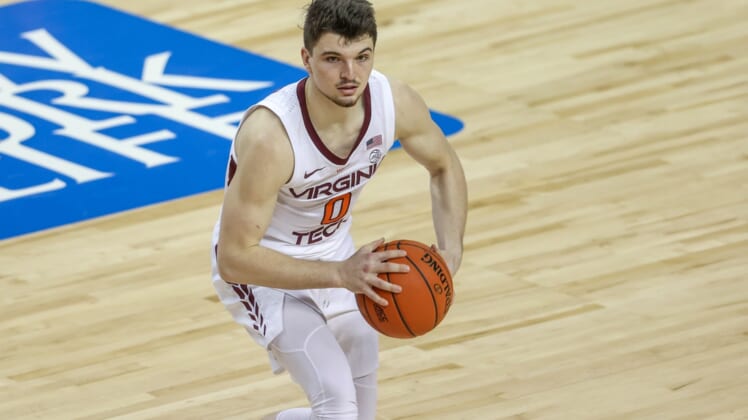 December was a month of starts and stops for Virginia Tech as each of its three wins was followed by a loss.

On Tuesday night, when Tech (8-5, 0-2) hosts reeling North Carolina State (7-7, 0-3) in an Atlantic Coast Conference game, the Hokies hope to successfully kick off a month in which they develop consistency.

The formula for the Hokies has been simple. When they shoot better than 40 percent from 3-point range , they’re 7-0. When they don’t, they’re 1-5. Case in point: In the Hokies’ most recent game, on Dec. 22, they had an eight-point lead early in the second half at then-No. 2 Duke but missed nine of their final 10 shots from long distance and lost 76-65.

“When the ball goes in the basket, it makes it an awfully easy game,” Tech coach Mike Young said. “It can be a tractor pull if that thing’s not going in.”

Hunter Cattoor leads the Hokies in 3-pointers with 30, shooting 44.8 percent on those. Reserves Darius Maddox and Sean Pedulla have combined for 22 treys, shooting 50 percent and 66.7 percent, respectively. But the rest of the Hokies have been spotty.

NC State, meanwhile, has dropped five straight. The string started with a near upset of then-No. 1 Purdue. But that promising overtime loss is in contrast to an 84-70 setback against Wright State, a Horizon Conference team with a losing record.

NC State has plenty of offense. Dereon Seabron has blossomed, ranking third in the ACC in scoring (19.6 points per game) and first in rebounds (10.1). Jericole Hellems (14.6 ppg) and Terquavion Smith (14.4) add scoring firepower.

On New Year’s Day, NC State’s frustration continued as it wasted a brilliant effort from Seabron, who hit 12 of 14 shots from the field on his way to 32 points and seven assists in an 83-81 home loss to Florida State.

It was another painful defeat to an ACC foe. NC State led Louisville by four before being outscored 9-0 over the final 2:21 in a 73-68 loss on Dec. 4. At Miami on Wednesday, the Wolfpack had a five-point lead with seven minutes left before yielding an 18-2 run in a 91-83 defeat.