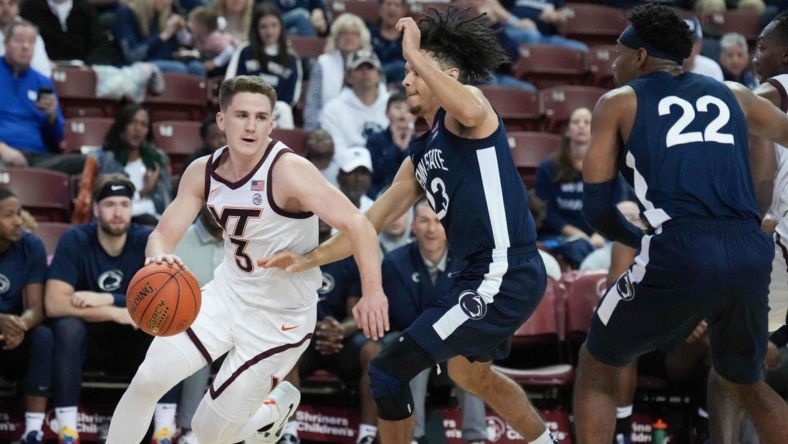 Grant Basile scored nine of his 17 points in the final 10 minutes as Virginia Tech held off a rally by Penn State in a 61-59 victory Friday afternoon in the semifinals of the Charleston (S.C.) Classic.

Justyn Mutts added 10 points and 12 rebounds, while Darius Maddox registered 11 points and five boards as the Hokies (5-0) led all the way, grabbing their biggest advantage at 16 points midway through the first half.

Perimeter-oriented Virginia Tech, which had depended heavily on 3-point shooting, pulled off an inside job as it outscored Penn State 40-24 from the paint. The Hokies made just 3 of 19 shots (15.8%) from beyond the arc.

The Hokies led all the way, though the Nittany Lions pulled to within two points on four occasions in the final seven minutes.

Penn State had a chance to win in the closing seconds. But as Camren Wynter drove to the basket, Hunter Cattoor got a hand on the ball, forcing a turnover with 1.1 seconds left.

Virginia Tech advances to Sunday’s championship game against the winner of Friday’s other semifinal between College of Charleston or Colorado State.

Penn State (4-1) entered averaging 81 points per game and shooting 46.2% from beyond the arc. But the Hokies forced 14 turnovers and harassed the Nittany Lions into 41.1% shooting overall and 36.7% from distance.

Andrew Funk hit five 3-pointers on his way to scoring 21 points to lead Penn State. Myles Dread scored all 15 of his points from beyond the arc. The rest of the Nittany Lions went 1 of 8 from distance.

In the first half, Virginia bolted to a 22-6 lead with a 12-point run ignited by a jumper from Maddox. Mylyjael Poteat came off the bench and gave the Hokies a lift inside as he scored two baskets during the run and added a blocked shot.

After missing their first six 3-point attempts, Dread broke the drought midway through the half with a pair of treys. Funk followed Dread’s lead, making a trio of 3-pointers in the final 7:12 of the half. His third shot from long distance cut the Hokies’ lead to 37-29 at halftime.

In the second half, Penn State chiseled away at the lead. Threes by Pickett, Funk and Dread got the Nittany Lions to within two points at 51-49 with 6:26 left.

With 1:08 left, Basile wheeled inside for a basket that put the Hokies up 61-56. Funk answered with a 3-pointer.

After Sean Pedulla (10 points) missed a 3-point try for Virginia Tech, Penn State got its final chance before Cattoor came up big with his defensive handiwork.