Virginia bounces back from earlier home loss to top Clemson 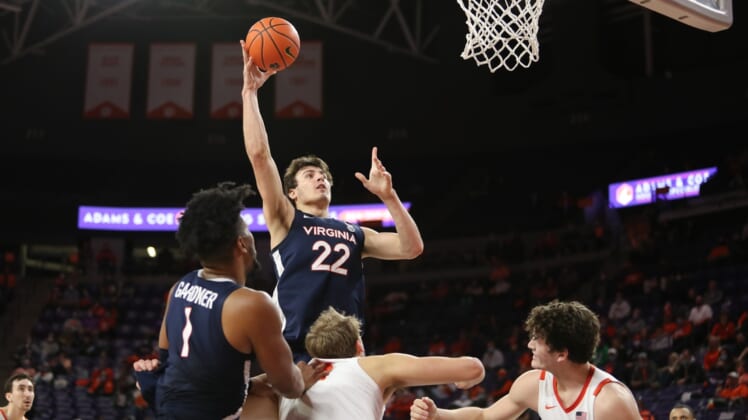 What a difference a couple of weeks can make.

Jayden Gardner scored 23 points as Virginia rallied for a 75-65 victory against Clemson Tuesday night – 13 days after suffering a 17-point home loss against the Tigers.

Gardner made 7 of 11 shots from the floor and 9 of 10 free throws for the Cavaliers (9-5, 3-1 ACC), who snapped Clemson’s four-game winning streak.
Armaan Franklin added 13 points for Virginia, which shot 54.3 percent from the floor and outrebounded Clemson 28-23.

Clemson (9-5, 1-2), which snapped an 11-game losing streak against the Cavaliers with its victory at Virginia on Dec. 22, has lost six in a row against Virginia at Clemson dating back to the 2013 season.

The loss was Clemson’s first in seven home games this season and dropped them to 17-2 at Littlejohn Coliseum over the last two seasons.

The game was close for 35 minutes. The first half included eight ties and eight lead changes and the game was tied at 20 midway through the opening half before Virginia used a 10-0 run to take a seven-point lead, 30-23, with 6:15 left in the half.

But the Tigers responded with a 10-0 run of their own late in the first half to regain the lead and take a 37-36 advantage into halftime.

Clemson led 57-56 on Hall’s three-point shot with 8:08 remaining, but Gardner and Franklin keyed a 13-3 run that included a six-minute field goal drought by Clemson to take control.

The game finished having 15 ties and 15 lead changes and included a reversal of fortune for Virginia, which had been 1-5 this season when trailing at the half.