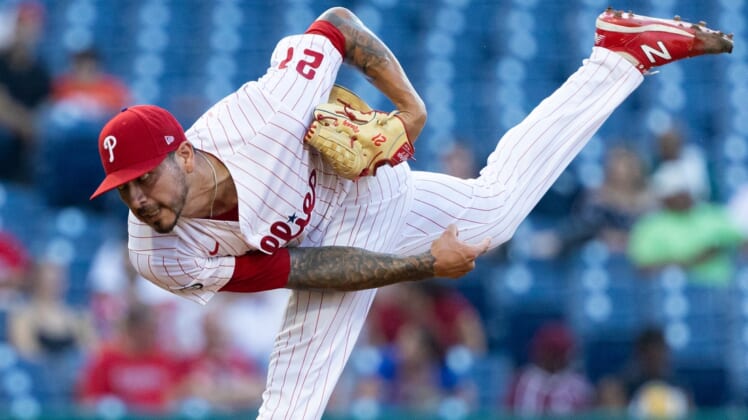 Velasquez (3-2) gave up two hits, struck out seven, walked none and retired the final 13 batters he faced.

Jose Alvarado allowed two runs but recorded the final four outs to earn his third save.

Alec Bohm walked three times while Jean Segura returned from the injured list and walked, reached base after being hit by a pitch and scored a run.

Adam Duvall homered and drove in two runs for the Marlins.

The Phillies jumped out to a 1-0 lead in the first inning when Andrew McCutchen blooped an RBI single to left field.

The Marlins managed only two hits — singles by Jazz Chisholm Jr. and Jon Berti — through the first four innings.

Velasquez retired seven straight batters and closed the fifth with two strikeouts and a popout by Luis Marte.

Segura walked with two outs in the fifth but J.T. Realmuto struck out swinging.

The Marlins went down in order again in the sixth, extending Velasquez’s streak to 10 in a row.

Rogers was equally stellar and struck out Bryce Harper and McCutchen to open the sixth. Hoskins then followed with a solo home run to left-center for a 2-0 Phillies lead. The homer snapped an 0-for-23 slump for Hoskins.

Philadelphia went ahead 3-0 in the seventh when pinch hitter Odubel Herrera hit an RBI double against Anthony Bender. It was the first earned run allowed all season by Bender.

Bender soon threw a wild pitch and Herrera scored for a 4-0 advantage.

The Marlins had runners on first and second with two outs in the eighth and Chisholm walked against Alvarado to load the bases. Alvarado then threw a wild pitch and the Marlins closed within 4-1. Starling Marte grounded out to shortstop to end the threat.

Duvall hit a two-run home run in the ninth and the Marlins cut the deficit to 4-3.