Broadcasting legend Vin Scully passes away at the age of 94 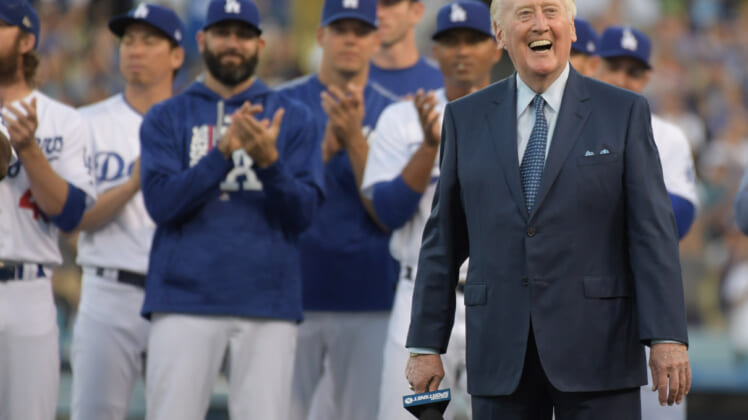 His career in the booth extended from 1950 to 2016 as the one true face of Dodgers baseball. In the process, generations of those who enjoyed America’s pastime are also reminded of his importance to it.

Sadly, the Dodgers announced Tuesday evening that Vin Scully has passed away at the age of 94.

Scully ended up becoming the voice of west coast baseball when the Dodgers moved from Brooklyn to Los Angles in 1958. His moments in the booth included legendary moments such as calling some of the greatest moments in baseball. Kirk Gibson’s home run in the 1989 series. Hank Aaron breaking Babe Ruth’s home run record. So many more.

Not only that, Scully teamed up with the likes of John Madden and Hank Stram to call NFL games for CBS Sports from 1975-82. One of his most legendary calls was Dwight Clark’s catch for the San Francisco 49ers against the Dallas Cowboys in the 1982 NFC Championship Game.

But more than anything, it was the passion and love for sports that Vin Scully brought to the broadcast booth. He loved calling the games. He loved being a part of the moment. He was an absolute icon up until his retirement after six decades of entertaining fans clear across the world.

As someone who was born mere months before Scully’s call in the 1982 NFC Championship Game, this one scribe remembers him for so much more. His call of Kirk Gibson’s home run against Dennis Eckersley in the 1989 World Series sent this young kid into tears as an Oakland Athletics fans. It is still seared into my mind nearly a quarter-century later.

Others who had the honor of listening to Vin Scully’s voice. His passion. His dedication to sports. They join pretty much everyone in mourning another sad passing around the sports world while paying homage to the legend he was.