After starting the day six shots behind the leader, up-and-coming Norwegian star Viktor Hovland captured his second title of the fall at the Hero World Challenge in Albany, Bahamas.

Hovland’s 6-under 66 brought him to 18-under 270 for the tournament, one better than Scottie Scheffler. His victory came after a Sunday collapse from third-round leader Collin Morikawa.

Hovland carded back-to-back eagles at the par-4 14th and par-5 15th holes, followed by a birdie at No. 16 to reach 20 under. But he nearly gave away the lead with a bogey on the final two holes at Albany Golf Course.

“Honestly, when I first teed off and obviously got off to just making a few pars early on, I didn’t really think winning was even in question,” Hovland said. 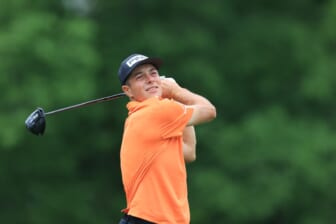 “But after I made three birdies in a row at the end of the front nine and I got to No. 9 and I was in the greenside bunker and I looked up at the leaderboard and I saw I believe I was tied for the lead, maybe one shot behind or something like that, that’s when I knew, ‘OK, if I play really well on the back nine, I’ve got a chance.'”

At No. 14, Hovland holed out for eagle from a greenside bunker. He reached the green in two shots on the par-5 15th and made a straight, mid-length putt for the next eagle.

The 24-year-old won four weeks ago at the World Wide Technology Championship at Mayakoba. His victory Sunday will not count as an official PGA Tour win nor earn him FedEx Cup points — the 20-man event is organized by Tiger Woods to benefit his TGR Foundation — but it will accrue him Official World Golf Ranking points. 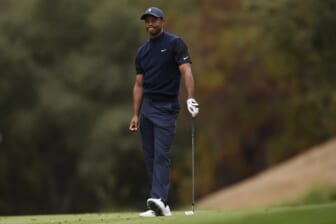 Morikawa began the day with a five-shot lead at 18 under. A victory would have pushed him temporarily into No. 1 in the world ranking. Instead, a pair of double bogeys at Nos. 4 and 6 doomed him to a 4-over 76.

Morikawa tied for fifth at 14 under with Justin Thomas, whose 64 was the round of the day.

“Obviously a little sad to see him not play his best today,” Hovland said of his friend and contemporary. “He’s a great player and I expected him to just kind of roll away with the victory, but sometimes this sport is not that easy and I’m sure he’ll come back even stronger.”

Thomas made an eagle, eight birdies and two bogeys Sunday.

“For as bad (as) some of the golf shots that I hit this week, I hit way more really, really good ones,” Thomas said. “I mean, obviously worked plenty hard the last couple weeks, but I wasn’t exactly my normal preparation with Thanksgiving the week prior. I was glad to at least have a good one today to salvage a decent week.”