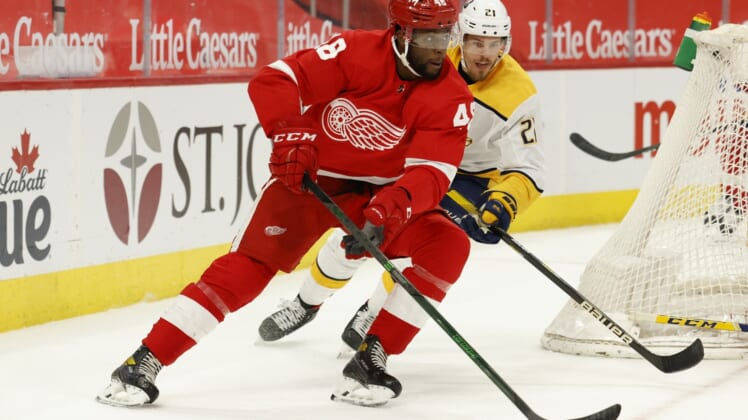 Viktor Arvidsson capped his third career hat trick with a penalty-shot goal to lead the visiting Nashville Predators to a 7-1 shellacking of the Detroit Red Wings on Thursday.

Erik Haula and Nick Cousins both collected one goal and one assist, while Mikael Granlund and Yakov Trenin also scored for the Predators, who scored seven unanswered goals.

Goaltender Juuse Saros made 25 saves to backstop Nashville to its third consecutive win.

Thanks to a stretch in which they’ve collected wins in nine of 10 games and 11 of 13 outings, the Predators strengthened their hold on the fourth and final playoff spot in the Central Division.

Darren Helm scored for the Red Wings, who sit last in the division and have one win in their last six games (1-3-2). Jonathan Bernier, in his first game since suffering an injury March 18, stopped 25 shots in the loss.

Just 40 seconds after Helm put the hosts on the board thanks to a point shot that banked off his leg, Arvidsson evened the score with his first of the night. He fanned on his shot, but got enough that it went into the air and banked off defender Jon Merrill and into the cage at 2:28 of the second period.

Haula put the Predators ahead four minutes later when he lifted a backhand from the slot into the cage for his first goal in 13 games, and then Cousins completed a great shift by his line with a shot that snapped a 13-game slump late in the middle frame to make it a 3-1 game.

The Predators made it a rout with a four-goal third period. Granlund found the mark from the slot at 7:06 of the final frame, and Arvidsson potted his second of the game at the midpoint of the period with a shot from the left circle during an odd-man rush.

Arvidsson finished off his 28th birthday celebration by completing the hat trick 66 seconds later with a penalty shot that he finished with a nifty backhand deke, while Trenin collected his third goal of the season when he held off a check and hit the top corner with a backhand shot to round out the scoring for the Predators, who have won six of eight meetings with Detroit this season.