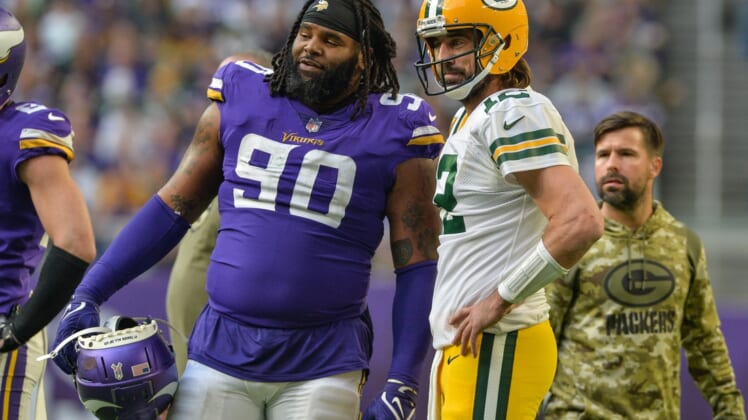 The Green Bay Packers go for their fifth win in a row when they host the NFC North rival Minnesota Vikings on Sunday night.

Green Bay (12-3) clinched its third straight division title. The Packers are coming off a 24-22 win over the Cleveland Browns on Christmas Day, which followed victories over the Baltimore Ravens, Chicago Bears and Los Angeles Rams during Green Bay’s latest win streak.

Although the Packers have locked up a playoff spot, they still have plenty of motivation heading into Week 17. Green Bay can clinch the NFC’s No. 1 seed, a first-round bye and home-field advantage throughout the conference playoffs with a win over Minnesota, combined with a loss or tie by the Dallas Cowboys against the Arizona Cardinals.

The Vikings (7-8) hope to spoil the Packers’ plans to secure the top seed.

Minnesota is coming off a 30-23 loss to the Rams last week, which followed back-to-back wins over the Pittsburgh Steelers and Chicago. The Vikings are on the outside looking in when it comes to the NFC playoff picture, and they are desperate for a win to keep their hopes alive.

Star wideout Adam Thielen will not be able to help the Vikings. The team placed Thielen on injured reserve Wednesday with a left ankle injury that reportedly required surgery. Thielen had 67 catches for 726 yards and 10 touchdowns this season.

“We’re not going to have him the rest of the way, so we just have to ask that much more of some of our other receivers and give some younger players a great opportunity to play and put some stuff on tape and show what they can do,” Vikings quarterback Kirk Cousins said. “I’m excited for that.”

Cousins, who is 29 passing yards shy of 4,000 for the season, still has top target Justin Jefferson. During the Vikings’ first game against Green Bay in Week 11, Jefferson hauled in eight catches for 169 yards and two touchdowns.

The Vikings also welcomed back running back Dalvin Cook from the COVID-19 list this week. Cook has 1,288 yards from scrimmage (1,067 rushing, 221 receiving) and six rushing scores.

The Packers have plenty of firepower, too.

Aaron Rodgers has passed for 3,689 yards, 33 touchdowns and four interceptions on the season. His No. 1 option, Davante Adams, has 106 catches for 1,362 yards and 10 touchdowns.

Rodgers will take the field for the first time since surpassing Brett Favre for most touchdown passes in franchise history. He now has 445, compared with Favre’s 442 with the Packers.

The 38-year-old spoke this week about the possibility of retiring after the season.

“I wouldn’t rule that out,” he said. “I think that I’m just enjoying this season for this season, and I think playing next year will definitely be in the thought process. … If this year has taught me anything, it’s that I still can play. I still have a love for the game.”

Minnesota has won two straight games against Green Bay. In their past 25 regular-season games, the Packers are 0-2 against the Vikings and 20-3 against the rest of the league.