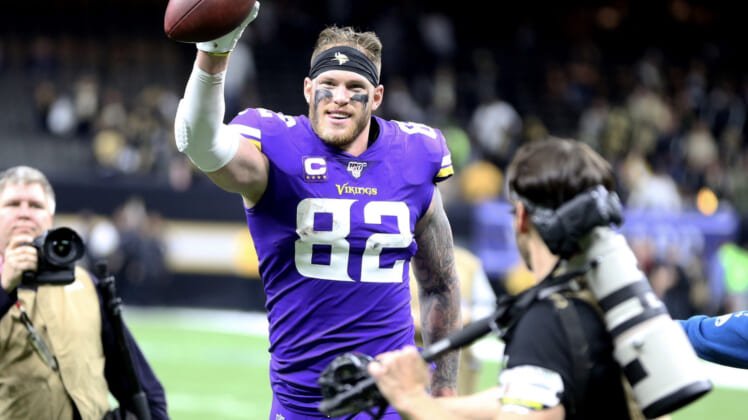 The Minnesota Vikings’ 2019 season came to an ugly conclusion Saturday against the San Francisco 49ers in the NFC Divisional Playoffs.

The final score of 27-10 doesn’t do the game justice. Minnesota was whooped on both sides of the ball, ending its season in premature fashion after a shocking win over the New Orleans Saints the week prior.

As we’re witnessing a major shake up of the team’s coaching staff under Mike Zimmer, it sure looks like the Vikings’ roster will be overhauled, too.

“These players — the ones that have been with me for six years now — they’ve busted their rear ends, and they’ve done everything I’ve asked them to do. And that’s always going to come into play; how you feel about them as a person,” Mike Zimmer said at his end of season presser Monday, via Ben Goessling of the Star Tribune. “But I think you have to really look at, ‘He’s a great kid. He’s worked his rear end off. We love him here. Can he still play? Or, if he can still play, at what level is it?’ And then you’ve got to match that with the salary and every other thing, and match it with the salary cap.”

The longtime Vikings head coach went on to note that it’s a “young man’s game,” a clear indication that he’s looking to move on from some key veterans.

It was noted over the weekend that two veterans who likely won’t be back in Minneapolis next season are Pro Bowl defenders Everson Griffen and Xavier Rhodes. Both carry lofty 2020 cap hits.

And as it relates to Rhodes, he was among the worst cornerbacks in the NFL this past regular season.

Outside of those two, there are a number of players who could end up getting their walking papers ahead of the new league year in March.

Veterans Harrison Smith and Kyle Rudolph both carry cap hits of $9-plus million next season. The likes of Linval Joseph and Riley Reiff are also expensive propositions.

Minnesota is currently estimated to be over the cap following a 10-win 2019 campaign. A lot of moves will be made to lower that number while enabling the Vikes to potentially add to an increasingly aging core with younger players.