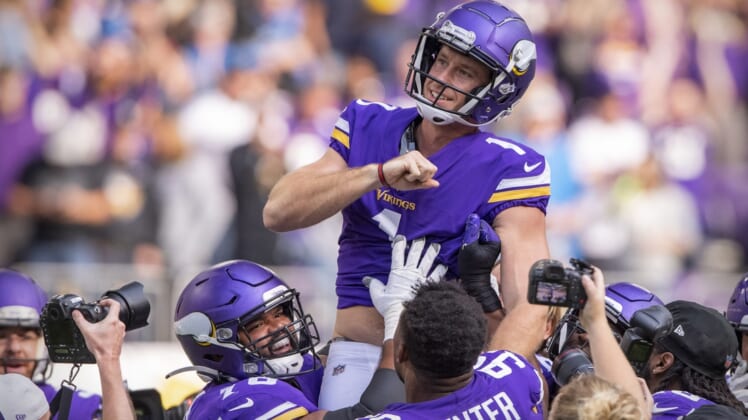 A couple of NFC North clubs will likely lean on their backup running backs to shoulder the load this Sunday after their starters injured those particular joints.

Minnesota‘s Dalvin Cook and Detroit‘s D’Andre Swift are not expected to play after suffering shoulder injuries in their team’s most recent game. The Vikings and Lions will go to Plan B, C and maybe D on the depth chart in Detroit.

Cook was injured during the third quarter of Minnesota’s 34-26 loss to San Francisco on Sunday. Cook has rushed for 773 yards and four touchdowns, along with catching 39 passes this season,

Cook didn’t practice on Wednesday, so it’s likely Alexander Mattison and Kene Nwangwu will be the ball carriers. Mattison has been the primary backup for three seasons.

“He does so many great things at running back, whether it’s running the football, protecting, catching the ball, running routes,” quarterback Kirk Cousins said of Mattison. “It’s a great comfort for me to have him back there.”

Cousins is also eager to see what Nwangwu can bring to the offense.

“He certainly has the athletic ability to be a great player,” Cousins said. “I’m looking forward to giving him more opportunities and letting him show the kind of player he is.”

If the run game falters, the Vikings (5-6) can always fall back on their aerial attack, featuring Cousins throwing the ball to Justin Jefferson and Adam Thielen. They have combined for 130 receptions, 1,713 yards and 16 touchdowns.

Minnesota has provided plenty of drama this season. All but one of its games was decided by eight points or less.

“As Coach Zimmer has said, the preference is to not even make it close,” Cousins said. “That’s certainly the first coaching point — let’s not leave it to the last play. But I know our opponent this week, the Lions, they’re saying the same thing.”

Minnesota defeated Detroit 19-17 on a last-second field goal in their first meeting on Oct. 10. The Lions (0-10-1) have lost three games in that fashion.

Over the past three weeks, they’ve tied Pittsburgh 16-16, lost to Cleveland 13-10 and fallen to Chicago 16-14. Cairo Santos kicked a 28-yard field goal on the last play during Detroit’s annual Thanksgiving Day game to break the Lions’ hearts once again.

Quarterback Jared Goff toughed it out through an oblique injury, but Swift didn’t play after spraining his shoulder late in the first half against the Bears. Jamaal Williams, Jermar Jefferson and Godwin Igwebuike are the Lions’ other running backs.

Swift has rushed for 555 yards, caught 56 passes and scored a combined six touchdowns this season. Williams is averaging 4.2 yards per carry on 93 attempts and has scored two touchdowns.

“(Swift) is one of the most dynamic guys in the league,” Goff said. “Having him on the ground and in the pass game is always helpful. I know he wants to be out there but Jamaal is ready to step up even more than he has. And so are J.J. and Godwin, so we’ll be ready to go on that front.”

After missing a game, Goff passed for 171 yards and two scores against the Bears. He feels healthier after getting extra time off before this Sunday’s contest.

“It was a good 5-6 days after the game to recover and get my body right,” he said. “I don’t want to make excuses but having that minor oblique deal, that was bothering me.”

Linebacker Anthony Barr (knee/hamstring) was among the other Vikings who missed Wednesday’s practice.