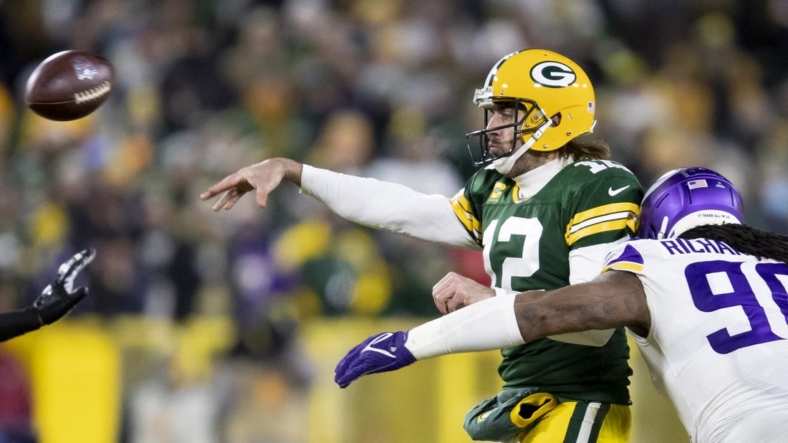 Even without one of the NFL’s best receivers, Aaron Rodgers and the Green Bay Packers seem properly positioned for a run at their fourth consecutive NFC North title — and possibly more.

Meanwhile, the Minnesota Vikings might be talented enough to end the Packers’ division reign and reach the playoffs for the first time in three years.

The likely NFC North frontrunners meet to open the season on Sunday in Minneapolis.

With no controversy surrounding his place in Green Bay, Rodgers, who turns 39 in December, is the two-time reigning NFL MVP and ranks fifth in league history in touchdown passes (449) and 10th in passing yards (55,360).

However, five-time Pro Bowl receiver Davante Adams is now in Las Vegas, Allen Lazard is dealing with an ankle injury that could keep him out of this contest and rookie second-rounder Christian Watson might be the team’s best receiver before season’s end.

Still, following a third straight 13-win season, the Packers have a penchant for reloading, not rebuilding, and are again very much in the conversation when it comes to Super Bowl contenders.

Aaron Jones and AJ Dillon return after combining for 1,602 rushing yards last season along with 86 receptions, while linebackers Rashan Gary (team-high 9 1/2 sacks in 2021) and De’Vondre Campbell (146 tackles, seventh-most in NFL) anchor a defense that ranked ninth in allowing 328.2 yards per game.

However, Green Bay has lost four of its last six trips to Minnesota, including a 34-31 setback in Week 11 last season.

Rodgers threw for 385 yards and four touchdowns in that contest, but the Packers defense allowed Kirk Cousins to throw for 341 yards with three scores. So, Green Bay is well aware of the challenge that awaits, especially to kick off the season.

“Week 1 is always really amped up, and you’re talking about a (NFC) North Division rival,” said Green Bay head coach Matt LaFleur, who is 39-10 in three seasons. “It’s one of the most hostile environments that we play in every year. A lot of it is who can adjust the fastest, and execute the best.”

Perhaps the biggest challenge for Green Bay is stopping a Minnesota offense that, when its components are healthy, can be among the most potent units in the NFL.

Entering his 11th season, Vikings quarterback Kirk Cousins has thrown for at least 4,000 yards in six of the last seven seasons and is the only quarterback to post seven straight campaigns with at least 25 touchdown passes.

Vikings running back Dalvin Cook has averaged 1,283.7 yards over the last three seasons — despite missing multiple games in each. Meanwhile, Justin Jefferson ranked among the league leaders with 108 receptions (fourth in NFL), 1,616 yards (second) and 10 touchdowns (tied for sixth) last season.

Defensively, former Packers star linebacker Za’Darius Smith (44 1/2 sacks and 53 tackles for loss over 91 career games) has landed with the Vikings.

With that talent in place, first-year Vikings head coach Kevin O’Connell is confident his team can challenge the Packers for the North crown — and return to the playoffs following a 7-9 record in 2020 and last year’s 8-9 mark.