Vikings’ Kirk Cousins and other QBs who could be benched next 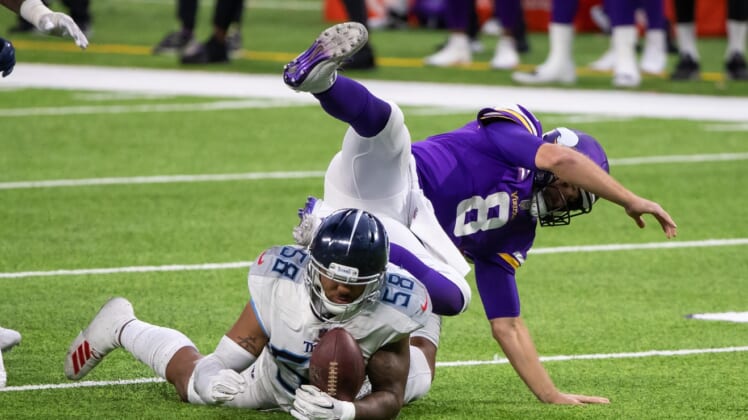 After three weeks of NFL action, sports bettors are eager to guess which quarterback will be benched next. In Week 3, fans saw the mid-game benching of Chicago Bears bust Mitchell Trubisky for Nick Foles. Will Week 4 lead to more quarterbacks being benched?

Sports Betting gives us the latest odds regarding the next quarterback who might be benched moving forward this season. There’s certainly some surprises on the list.

Off to an 0-3 start, it’s not surprising to see NFL odds pointing to a change at quarterback for the New York Jets. The major issue there is, who takes over? Is Joe Flacco healthy enough? Darnold is the most likely to see the bench according to prop bets available. That’s not a surprise given he threw two interceptions that were returned for touchdowns last week.

This is the one that makes some sense on the surface, knowing who the backup is. However, it could be a while before rookie Tua Tagovailoa sees the field after Ryan Fitzpatrick’s Week 3 performance in a win over the Jaguars. I wouldn’t expect a sudden short leash in Week 4 against the Seattle Seahawks. It’s also important to note that Tagovailoa missed practice on Wednesday with an illness.

After Herbert got the surprise start in Week 2, he hasn’t offered a huge reason why the Los Angeles Chargers should go back to Tyrod Taylor. However,, head coach Anthony Lynn refuses to officially name Herbert the starter, saying the job goes back to Taylor once he’s healthy again. It looks like the veteran will miss Week 4 with his rib injury. There’s no chance Herbert is benched this week if Taylor can’t go.

With the Washington Football Team off to a 1-2 start, Dwayne Haskins has yet to impress in year two. His numbers are down across the board this season. It doesn’t appear that Haskins has improved since last year. Washington actually has two viable backups with plenty of NFL experience in that of Alex Smith and Kyle Allen. Playing the Baltimore Ravens on Sunday, we’ll see how short the leash is for Haskins.

The Minnesota Vikings are off to a terrible 0-3 start. There are many fans in Minnesota calling for the head of quarterback Kirk Cousins. While he seems to always be around controversy, the Vikings really don’t have a better option. According to PFF, in Week 3 Cousins was the most pressured quarterback since Week 12 of last season. The Vikings need to find a way to protect their quarterback, no matter who is under center. Don’t expect a benching in Minnesota any time soon.