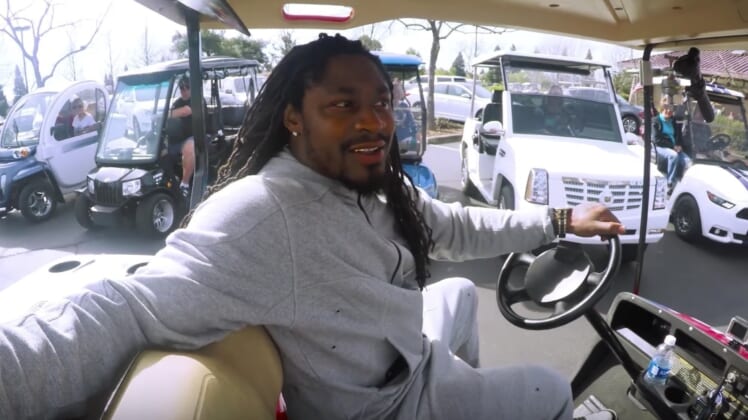 While his future with the Oakland Raiders remains in limbo, Marshawn Lynch is at it again with another endearing Skittles marketing spot.

Will Marshawn Lynch be back in the Silver and Black?

Perhaps no one but Lynch knows the answer to that question. What is not in doubt is the Beast Mode brand is out making money and making people smile.

The latest collaboration between Lynch and Skittles hit the interwebs this week and it’s pretty damn good. This time, Mashawn finds himself introducing the new Skittles Sweet Heat flavor of the chewy candy at a senior living community.

Lynch gets down with a group of grandmas. All in the name of funny and Skittles!

Lynch arrives in the community on a Skittles-branded golf card – arriving by driving off a curb and screeching to a halt (laying rubber) as he pulls into the community’s golf course. Lynch then gets various 55+ residents to try the candy with some hilarious reactions (see video above).

The video really plays off of Lynch’s unique personality and shows him being respectful to his elders. While Lynch is often misunderstood and maligned for his individuality, the spot utilizes it and shows why he is loved inside the Raiders locker room.

Lynch even shows off his athletic skills playing games like “pickleball” and whirling various ladies around the dance floor. Watching the video is worth the time and shows us, yet again, a side of Lynch so often overlooked when talking about his personality.

The latest video is just one in an on-going endorsement deal between the candy maker and one of its best customers – Lynch. The two teamed up for a unique Super Bowl ad campaign as well where the commercial was shown to only one person (who happened to be fictional.)