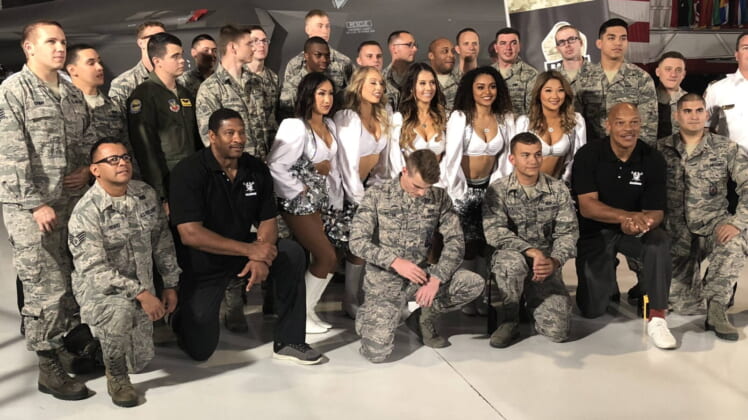 On the final day of the 2018 NFL Draft, the Oakland Raiders made their draft picks from the hangar of the beloved U.S. Air Force precision flying team the Thunderbird at Nellis Air Force Base just outside Las Vegas.

For U.S. Air Force pilots, there’s nothing more vital to success than teamwork, precision, and flawless execution. The much could be said for an NFL football team like the Oakland Raiders.

To close out the 2018 NFL Draft, the Raiders, in conjunction with the U.S. Air Force, invited military families to a draft party in the hangar of the Thunderbirds at Nellis Air Force Base. It was an opportunity for the Raiders to honor those who serve and to continue their work in the Las Vegas community.

Around 100 Airmen and their families attended the event with several of them announcing the Raiders picks live on national television. They mingled with Raiders alumni Greg Townsend and Napoleon McCallum, the Raiderettes, and members of the media. Raider fans who serve were on hand wearing their silver and black attire and cheering when the team made its picks.

“This is a great opportunity for us to work with the NFL, the Raiders, and military families,” said Major Ray Geoffory, the 12th Thunderbird and public information officer for the demonstration team. “It’s exciting to welcome the Raiders and all of you into our home.”