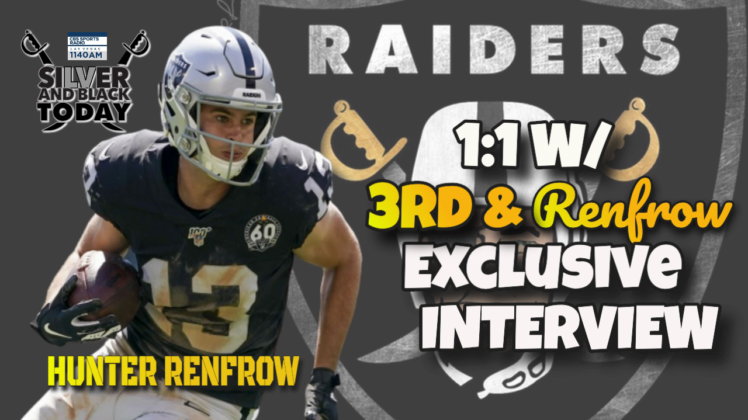 Hunter Renfrow visited Las Vegas for the first time last week and we were granted an exclusive interview with him.

Last week we brought you a portion of a video interview we did with Las Vegas Raiders wide receiver Hunter Renfrow on his first trip to Las Vegas. In town to promote the importance of eating a healthy breakfast to local high school students, Renfrow talked with us about his community work but also talked some football.

After a successful rookie season where he grabbed 49 receptions for 605 yards and 4 touchdowns in 13 games, Renfrow shared with us what he learned during his rookie campaign.

Renfrow also talks about Derek Carr, the Raiders offense, and what one thing he must do in order to get better in 2020.

DON’T FORGET: Subscribe to the Silver and Black Today YouTube Channel…but you CAN’T STOP THERE! Be Sure to hit the “Notifications” BELL and then click ALL so you never miss another video!

Renfrow, whose boyish appearance makes him look younger than his 24 years, was visiting the school as part of the celebration of National School Breakfast Week. Representing the Dairy Council of Nevada, Renfrow spoke to students about his own struggle to understand the importance of eating a good breakfast and to encourage them to eat well early.

The event builds on the Raiders involvement in the Las Vegas community as their new home. In January, as the team officially became the Las Vegas Raiders, the organization donated $500,000 toward eliminating meal debt through the Nevada Community Foundation. Nevada schools are working directly with the National School Lunch and Breakfast Programs, a federally-funded assisted meals program, to improve nutrition for school-aged kids.