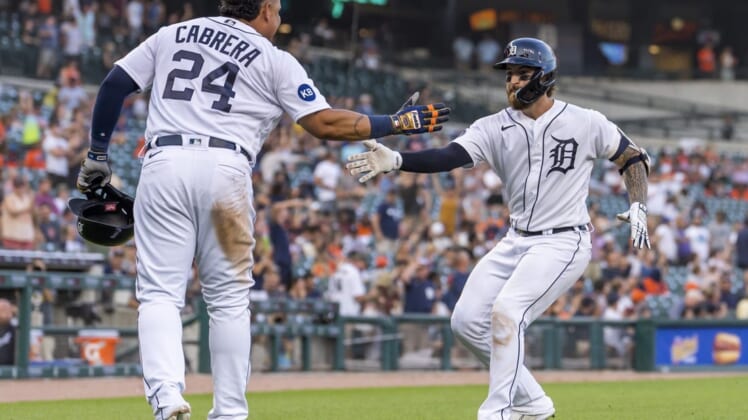 Miguel Cabrera contributed three hits while scoring twice and knocking in a run as the Tigers won their third straight. Eric Haase hit a two-run homer and scored twice.

Tigers starter Drew Hutchison (1-4) notched his first win since last September, allowing two runs (one earned) and five hits in five innings. He struck out two without walking a batter.

The Guardians scored an unearned run in the first inning. Amed Rosario reached on an error by shortstop Harold Castro and moved to third on Jose Ramirez’s bloop double. Rosario scored on Franmil Reyes’ sacrifice fly.

Detroit took a 4-1 lead in the second with the aid of an error. Jonathan Schoop was hit by a pitch with one out, and second baseman Andres Gimenez fumbled Jeimer Candelario’s grounder. Spencer Torkelson walked to load the bases before Reyes slapped a two-run single to left. Torkelson was thrown out at third on the play. Reyes scored on Greene’s double to right.

After Robbie Grossman walked, Cabrera lined a single to knock in Greene.

Cleveland cut the Tigers’ lead to 4-2 in the fourth. Reyes hit a one-out double and scored on Miller’s two-out single.

The Tigers increased their advantage to 6-2 in the bottom of the inning. Cabrera reached on a two-out single and scored on Haase’s seventh homer, which cleared the right field wall.

Detroit made it 8-2 against reliever Nick Sandlin in the fifth. Candelario reached on a one-out single and Reyes kept the inning alive with a two-out infield single before Greene’s double off the left-center-field wall, which brought in both runners.

The American League Central rivals wrap up the four-game series on Wednesday afternoon, with Detroit looking for a sweep.