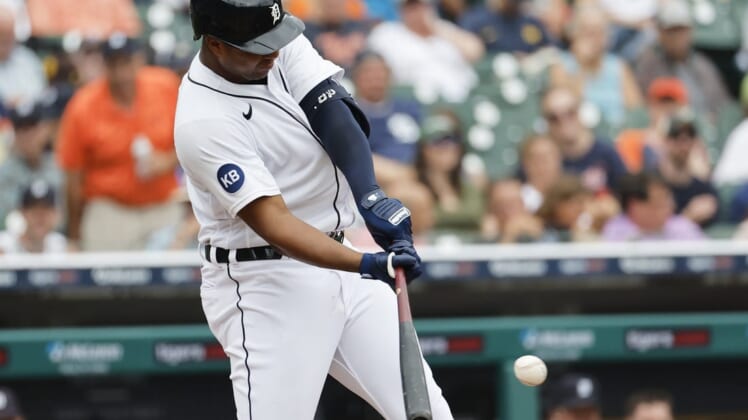 Victor Reyes hit a two-run, walk-off double with two outs off San Diego closer Taylor Rogers to give the host Detroit Tigers a 4-3 win over the Padres on Wednesday afternoon.

Jeimer Candelario, who began the ninth-inning uprising with a double, had three hits and drove in two runs. Michael Fulmer (3-4) collected the victory with an inning of scoreless relief.

Candelario led off the ninth with a double to left-center and was replaced by pinch-runner Akil Baddoo. Rogers retired the next two batters before Jonathan Schoop reached on an infield single. Down to his final strike at 1-2, Reyes then ripped his game-winning hit off the right field wall.

The Tigers scored a run in the opening inning. Javier Baez had a one-out single, advanced on a groundout, stole third base and came home on Candelario’s bloop single. Eric Haase struck out looking to end the inning.

Neither team had a baserunner until the Padres’ Jake Cronenworth slapped a one-out single in the fourth. After first baseman Harold Castro dropped a foul pop by Manny Machado, Skubal seemed to get rattled. He walked Machado during a long at-bat, then threw a wild pitch.

Luke Voit knocked in Cronenworth with a sacrifice fly. Skubal then walked Austin Nola before Ha-Seong Kim smacked a single to score Machado. Right fielder Reyes made a diving catch against Esteury Ruiz to keep the score at 2-1.

The Tigers tied it up in the sixth on consecutive singles by Castro, Miguel Cabrera and Candelario.

The Padres caught a break while regaining the lead in the seventh. Kim struck out against Joe Jimenez but the ball wasn’t caught cleanly and catcher Haase made a throwing error. Trent Grisham had a one-out single before Profar’s two-out, run-scoring single made it 3-2.