Victor Oladipo set to suit up for Miami Heat vs. Golden State Warriors 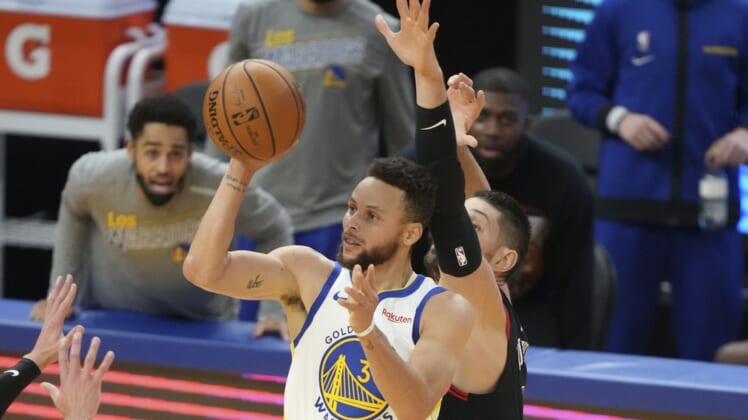 The Miami Heat expect to finally have two-time All-Star Victor Oladipo on the court on Thursday night when they host the Golden State Warriors.

Oladipo had been dealing with a cold, which kept him from making his team debut this week during Miami’s two-game road trip to New York and Indiana. The Heat acquired Oladipo, who will be a free agent after the season, in a March 25 trade with the Houston Rockets.

The Heat hope Oladipo’s arrival will help fuel another potential run at a championship.

Over the past two games, Miami regained a key component to its potential success — its defensive identity.

Led by Duncan Robinson and Jimmy Butler, the Heat held the Pacers to five points over the game’s final six minutes en route to a 92-87 comeback victory on Wednesday in Indianapolis. Miami also held the Knicks to 88 points in a 10-point victory at New York on Monday.

Against the Pacers, Robinson hit 6 of 11 3-point attempts and finished with 20 points, eight rebounds and four assists. Butler added 18 points.

Spoelstra was most pleased with Robinson’s efforts on the defensive end, especially down the stretch.

“It’s not like an overnight improvement,” Spoelstra said. “You’re literally talking about hundreds of days of development. He’s making those efforts to get to the 3-point line. His technique has worked because of all that work.”

Golden State is set to begin a three-game trip to the East Coast with its centerpiece player back in the lineup.

Stephen Curry returned Monday after missing the previous five games with a bruised tailbone, and he fueled the Warriors’ 116-102 home victory over the Chicago Bulls. Curry finished with 32 points, hitting 11 of 24 field-goal attempts, including 6 of 14 from 3-point range.

His ability to find open teammates (six assists) and create opportunities off the dribble opened up Golden State’s offense.

Andrew Wiggins contributed 21 points and Kelly Oubre Jr. totaled 18. Rookie James Wiseman shot 6 of 8 and finished with 12 points, five rebounds and a career-high four blocks, while Draymond Green had 11 points on 4-of-7 shooting, including 3-of-5 from 3-point range.

“He’s the heart and soul of what we do,” Golden State coach Steve Kerr said of Curry. “I think the last few games, it’s been tough without that dynamic of having Steph flying off screens and running pick-and-roll and spreading the floor and bringing his juice, his life and energy to the game. So we’ve been in a little rut and we needed him, and he came through.”

Curry is still dealing with the injury but told reporters after the game it will be something he will manage as he continues to play.

“It wasn’t fun, but got through it,” Curry said. “I was able to keep warm and deal with the pain and just play.”

Warriors forward Eric Paschall is expected to miss his second consecutive game due to a sore left wrist.

For the Heat, Kendrick Nunn missed his second consecutive game on Wednesday because of a right ankle sprain.