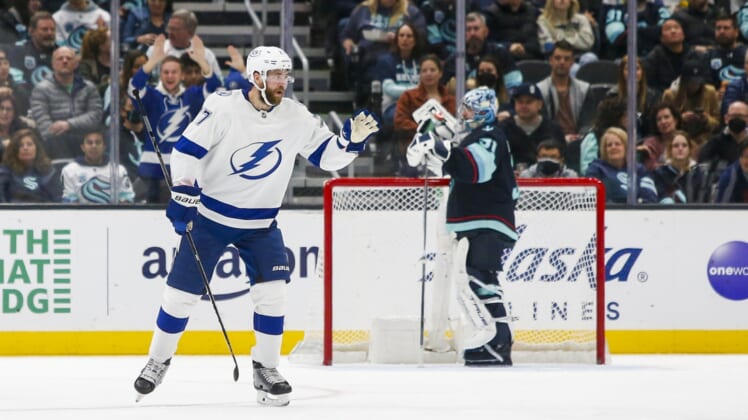 Victor Hedman scored a pair of power-play goals as the Tampa Bay Lightning wrapped up a six-game trip with a 4-1 victory against the Seattle Kraken on Wednesday night.

Nikita Kucherov and Anthony Cirelli also scored and Steven Stamkos, playing in his 900th career game, had three assists for the Lightning, who went 3-3 on the trip. Goaltender Andrei Vasilevskiy made 24 saves.

Yanni Gourde scored for the expansion Kraken, which lost for the 12th time in their past 14 games (2-10-2). Philipp Grubauer stopped 35 shots.

Hedman’s first goal broke a 1-1 tie at 8:48 of the second period. Stamkos banked a drop pass off the boards for Hedman at the left point and his slap shot beat a screened Grubauer.

Hedman capped the scoring with a slap shot from just outside the top of the faceoff circles at 14:26 of the third after a pass from Stamkos.

The Lightning converted 2 of 6 power-play chances after going 0 for 14 through the first five games of their trip.

Seattle struck first as Gourde, selected from Tampa Bay in the expansion draft, scored a power-play goal at 2:38 of the first, taking a cross-ice pass from Jordan Eberle and beating Vasilevskiy to the near post with a one-timer from the right faceoff circle.

The two-time defending Stanley Cup champion Lightning tied the score at 6:26 as Kucherov beat Grubauer on a two-on-one break after taking a nifty pass from Stamkos.

Cirelli extended the advantage to 3-1 just 23 seconds into the third, backhanding a loose puck through a maze of players after a scramble in front of the Seattle net.

Kraken captain Mark Giordano was honored pregame for appearing in his 1,000th career contest on Seattle’s just-completed trip. But the veteran defenseman didn’t play against the Lightning because he’s expected to be sent to a contender before next week’s trade deadline.

The Kraken were also without first-line center Calle Jarnkrok, traded to Calgary late Wednesday afternoon for a trio of draft picks.

The short-handed Kraken didn’t have time to call up a forward from their American Hockey League affiliate in Charlotte, N.C., so they deployed defenseman Haydn Fleury on the wing on the fourth line.