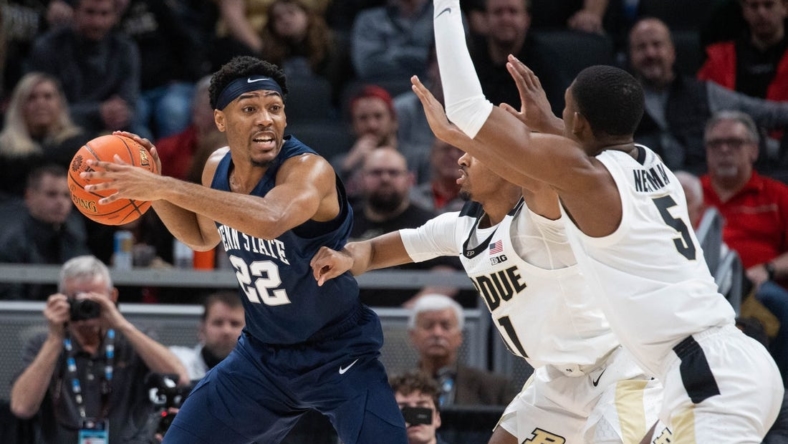 With an experienced squad and plenty of reasons for optimism, Penn State hopes to start its season with a win Monday night when it hosts Winthrop in State College, Pa.

The Nittany Lions are coming off a season in which they finished 14-17 and reached the quarterfinals of the Big Ten tournament. They defeated Indiana, Iowa, Michigan State and Ohio State last season, and they will return four of their five starters.

“We’ve grown from year one to year two,” Nittany Lions coach Micah Shrewsberry said in reference to his first two seasons in Happy Valley. “Having continuity is huge in this time. Even though we have eight new players on our roster, having the other guys … that were with us last year, it makes it easy.”

Andrew Funk (Bucknell) and Camren Wynter (Drexel) join the fold as transfers and will be expected to contribute significantly for a team with postseason aspirations. Funk averaged 17.6 points for the Bison last season, while Wynter scored 15.8 points per game for the Dragons.

All of that talent could spell trouble for Winthrop, which is coming off a solid season of its own: 14-2 in the Big South and 23-9 overall. The Eagles were picked to finish second in the league behind Longwood in this season’s preseason poll.

Cory Hightower averaged 11.8 points per game last season and pulled down 5.5 rebounds per contest, which led the team. He also made a career-high 52 3-pointers, second most on the squad, while hitting 40 percent of his attempts from behind the arc.

“I think we’ll have a better understanding of where we are as we get into some of our non-league games,” said Eagles coach Mark Prosser, who is entering his second season on the job. “But there’s a lot to be excited about. There’s some things that we obviously have to get better at. We’re far from a finished product. But that’s where we’re supposed to be.”