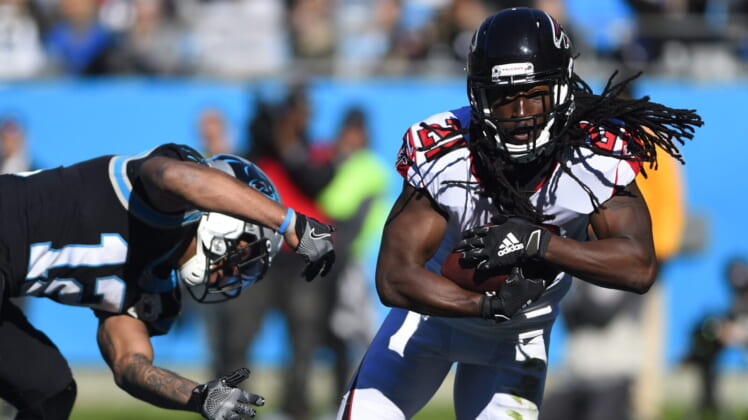 On Wednesday, the Las Vegas Raiders signed cornerback Desmond Trufant to the 53-man roster and offensive tackle D.J. Fluker to the practice squad.

In a corresponding move for Trufant, the Raiders placed safety Roderic Teamer on Injured Reserved, leaving him sidelined for at least three weeks.

That means the earliest Teamer could return is in Week 10 (the Raiders have a Week 8 Bye) when Las Vegas takes on the Kansas City Chiefs on Nov. 14.

Trufant, was a former first-round pick by the Atlanta Falcons in 2013 and following his rookie season, he received Pro Football Focus Defensive Rookie of the Year honors.

During the first two games this season with the New Orleans Saints, he played in 57 of the Saints snaps and one snap on special teams. The 6-foot cornerback added a pass deflection a three total tackles.

For the first seven seasons of his career, Trufant played for the Falcons and was a Pro Bowler in 2015. In addition, in his first three seasons and in 2018, he started in all 16 games.

As a Falcon, Trufant played in 97 games, in which he all started and recorded 13 interceptions, highlighted by four picks in 2019. Trufant accumulated 79 pass deflections, three forced fumbles, seven fumble recoveries, two of which were taken to the endzone. The 31-year-old also recorded 329 tackles, nine tackles for loss and six quarterback hits.

In 2020, Trufant spent time with the Detroit Lions and started six games. He recorded 20 total tackles, a tackle for loss and a quarterback hit. He also recorded an interception during his time in the Motor City.

Bisaccia said he expects Trufant to play against the Philadelphia Eagles, while still adapting to the Raiders’ language.

“He had a good day today,” Bisaccia said. “He’s been in the system, maybe the verbiage has been a little bit different, but we’re expecting him to be in the three-man rotation and contribute for us gong into the game on Sunday.”

Fluker is not on the same track as Trufant as the 30-year-old tackle is close to finishing his rehab from having meniscus surgery back in August.

Fluker signed a one-year contract in the offseason with the Miami Dolphins before being released by the team in early August and was suspended six games in early September.

Now with the Raiders, Bisaccia is hoping he can provide experience and stability to the offensive line in a few weeks when he gets healthy.

Fluker, who was a former first-round pick in 2013 by the then-San Diego Chargers, played four seasons in America’s Finest City. He started in 59 games and split time between the offensive line and special teams. During Fluker’s career, he has played at least 90% of the team’s snap-in six of his first seven seasons.

After his time with the Chargers, he went east to the New York Giants in 2017 and played in nine games, started six and played in 76% of the team’s snaps.

During Fluker’s career, he has split time between right guard and right tackle. As he gains knowledge with the Raiders, Fluker can add another veteran voice – along with left guard Richie Incognito – to help players, such as rookie Alex Leatherwood adjust to the NFL.

The Raiders have a plethora of Alabama alumni, highlighted by Leatherwood and running backs Josh Jacobs and Kenyan Drake.

Fluker, who also attended Alabama, won two National Championships during his collegiate career. If Fluker makes the active roster, the Raiders will have seven alumni who went to college in Tuscaloosa, Alabama.

Jacobs, who was one of three Alabama alum to score at least a touchdown along with Drake and wide receiver Henry Ruggs last week against the Denver Broncos, said Fluker will be a key piece to the Raiders’ puzzle once he is ready to go.

“DJ is an Alabama legend,” Jacobs said. “He’s on the walls in the building, he has the ultimate respect by the coaches in that building at Alabama. Seeing him come in, I told him last game felt like an Alabama Raider day. I think he’s going to be a good addition to the team. Get him in here, get him in shape, get him acclimated to what we do here and see where it goes.”