Reports on Friday indicate the Vegas Raiders will stay home again for training camp at the Intermountain Healthcare Training Center in Henderson. 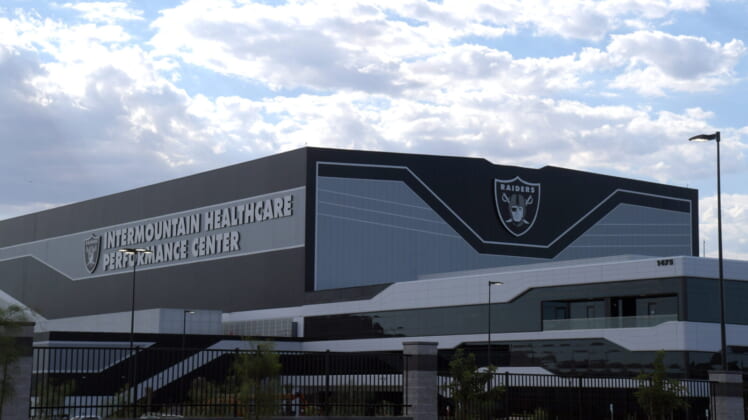 Despite Bay Area fans wanting the team’s Napa training camp to return, a report by the Las Vegas Review-Journal Friday says the Vegas Raiders are staying home in Henderson for another training camp in 2021.

Despite the NFL allowing its teams to conduct training camp away from team facilities as the nation continues its post-COVID-19 return to normal, apparently, the Las Vegas Raiders are staying home in Henderson.

A report by Vinny Bonsignore in the Las Vegas Review-Journal says sources with knowledge of the team’s plans are not going offsite for training camp. The story indicates the Vegas Raiders will again forgo their usual training camp home of Napa, California. Napa, 50 miles north of San Francisco, has been the Raiders training camp home for decades. Many Bay Area Raiders fans had hoped their team would return for the 2021 camp but that appears less likely, per the report.

The report did not indicate if fans will be able to attend this season’s training camp.

Last season, the NFL mandated all teams conduct their training camps at their home facilities. The Raiders held their camp in Henderson at the $75 million Intermountain Healthcare Performance Center. It worked out so well for them, the report indicates, they’re happy to do it again.

With the NFL loosening restrictions on the team’s conducting camp offsite, those interested in doing so must submit a proposal to the league no later than June 11 for consideration and approval. Any team that wishes to conduct a training camp away from their facility, must submit an Infectious Disease Emergency Response Plan and “comply with the NFL-NFLPA COVID-19 protocols at the alternative locations,” the report states.

The Vegas Raiders are coming off a busy draft where they bolstered their putrid defense and bolstered their offensive line. Their first-round pick, Alabama offensive lineman Alex Leatherwood will slot in at the starting right tackle position emptied by Trent Brown’s trade to New England. Jon Gruden and Mike Mayock also added a slew of defensive backs in the draft including TCU safety Trevon Moehrig. While the defense is far from fixed – the Raiders still have massive question marks along the defensive line and ability to pass rush – it’s on the way to better days under new defensive coordinator Gus Bradley.

There’s no question Vegas Raiders fans are eagerly awaiting what their new squad will look like as training camp kicks off later this summer in Henderson.