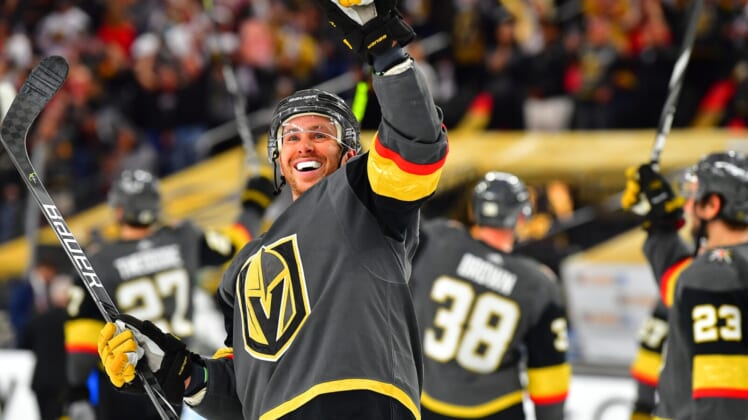 The Vegas Golden Knights played one of their most complete games of the playoffs so far and dismantled the Minnesota Wild from start to finish in a 6-2 win, in Game 7 in Las Vegas Friday night. It took three attempts but the Golden Knights finally managed to finish the series with the Colorado Avalanche waiting in the wings in the second round of the Vegas pursuit of their first-ever Stanley Cup.

It didn’t take long for Pacioretty to answer those questions. He scored the game-winning goal and contributed the entire game. While he was on the ice at 5-on-5 the Golden Knights had five high-danger scoring chances to the Wild’s one, controlled 74.02% of the xG, scored twice, and didn’t allow any goals.

For the third consecutive postseason, the Golden Knights blew a 3-1 series lead and were forced to play a do-or-die Game 7. However, this was the first Game 7 that was played in Vegas and the fans made sure their presence was felt. Just as they did last year against the Vancouver Canucks, the Golden Knights didn’t fold under the pressure and outplayed their opponents in almost every facet of the game, eventually securing as stress-free a victory as possible for a Game 7.

Mattias Janmark opened the scoring, added another one late in the third period that sealed the game, and then ended the game with a diving empty-netter for the hat trick. Depth scoring was the theme of the game for the Golden Knights as all but one of their goals came from players slotted lower in the lineup.

The Golden Knights have now earned the right to face off against the Colorado Avalanche in the next round in the playoff series that everyone has been waiting for. Despite both being members of the West Division, the Golden Knights and Avalanche were the two best teams in the entire NHL throughout the majority of the season.

Max Pacioretty makes an impact in his return

When Max Pacioretty stepped on the ice to take his first shift in many weeks, T-Mobile Arena erupted. He has been dearly missed during his absence as the Golden Knights have struggled to score without him, as well as had their depth spread thinly on the left-wing. His return was welcomed but the question still remained as to how healthy he really was and how effective he would be?

“There was some good days and bad days but turned the corner there a couple days ago,” said Max Pacioretty after the game, “A lot of people behind the scenes were helping me around the clock to get to where I feel tonight….that was a big reason I was able to get to play tonight.”

It didn’t take long for Pacioretty to answer those questions. He scored the game-winning goal and contributed the entire game. While he was on the ice at 5-on-5 the Golden Knights had five high-danger scoring chances to the Wild’s one, controlled 74.02% of the xG, scored twice, and didn’t allow any goals.

Pacioretty was a huge boost to a Golden Knights’ offense that had been frustrated by the Wild over the previous two games.

The Golden Knights got two big goals from defensemen in this crucial Game 7. The contributions from the backend were much appreciated and helped propel the team to victory. Nicolas Hague had a shot from the point that beat Wild goalie Cam Talbot to put the Golden Knights up 2-1, and Zach Whitecloud followed up later in the period to extend the Golden Knights’ lead to 4-2.

“Those two kids have done a phenomenal job for us all year.”, said head coach Peter DeBoer, “The reason we score easier this year than the year before has been the addition of the defensemen scoring back there and their ability to get pucks to the net and transition pucks.”

The Golden Knights showed off their firepower with six goals in this game but the two from defensemen might have been the most crucial. The Wild have done a great job of building a wall on defense and keeping the Golden Knights to the outside. Since these outside shots were finding the back of the net, the Wild couldn’t play as solid and passive of a style as they did in previous games. This was just one among many changes that got the Golden Knights to score more goals tonight than they did in any other game this series.

Looking ahead to the Colorado Avalanche

The Golden Knights now face off against the Colorado Avalanche on Sunday evening in what will be the most intense series of the second round. The two teams have been on a collision course for the entire season and finally fans will get to see the two best teams face off against each other.

The Avalanche have an abundance of talent that can score goals in a jiffy. The Golden Knights will not be able to afford any slow starts as they had in this series as they will face insurmountable deficits. When asked about his thoughts on facing off against the Avalanche in the next round, Max Pacioretty was quick to point out how strong of a team they are.

“The best team in the league and arguably have the best player in the league,” commented Pacioretty postgame, “We’re going to get each other here pretty fresh. We both had the same record but they got us on tiebreak and everyone believes they’re the measuring stick in the league.”.

The Golden Knights will have to play some strong hockey if they’re going to win the series, but the return of Pacioretty and momentum built up after tonight give them a good start. They’ve emphasized playing their best hockey as the playoffs progress and a resilient series win like tonight shows a lot about the team’s character.

“We never give up. As a group we’ve been so good all year keeping an even-keel and pushing forward. We’re never out of the fight.” commented Hauge, “We had two chances to close it, one at home and one on the road, and not being able to do that but coming back.”

The Golden Knights begin their next series against the Colorado Avalanche at 5 PM PDT in Colorado.