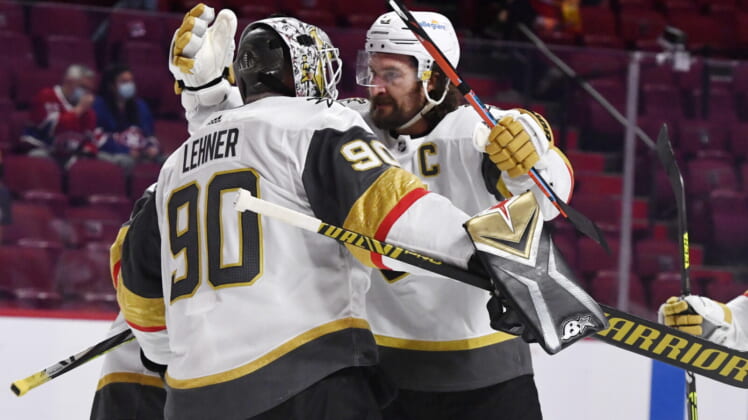 It wasn’t an easy call to make, but Vegas Golden Knights head coach Peter DeBoer was up to the challenge as he decided to go with Robin Lehner as his starting goalie for Game 4. The decision paid off as Lehner was sensational, ending the night with 27 saves as the Golden Knights beat Montreal 2-1 in an overtime win.

The Golden Knights now stand even with the Montreal Canadiens as each team has two wins apiece in this semi-finals series.

Despite playing one of their worst games offensively of these playoffs, the Golden Knights could get enough goals to eke out the victory. Nic Roy ended the game in overtime after he put home a rebound over a flailing Carey Price. It’s Roy’s second goal of the series. He has had more asked of him, considering Chandler Stephenson is missing from the lineup due to injury, but he’s fulfilled that role well.

The Golden Knights will now head back to Vegas with the series tied up at two for a crucial Game 5. Whichever team wins that game will have a massive advantage in that they would need to lose two consecutive games to be eliminated from the series. For the Golden Knights, they will be relying on their fans to give them the energy to help push them over the edge.

Marc-Andre Fleury had started every game throughout this playoff run except for one before Game 4. He has been playing well, making timely saves and bailing the team out on a few occasions. However, he has also committed a few huge mistakes, including one that cost the Golden Knights Game 3. This wasn’t his first mistake of these playoffs that ended up with the puck in the back of the net.

Thus DeBoer decided to switch things up for Game 4 and let Lehner start. Lehner had a strong regular season and isn’t your typical backup. He’s good enough to be the starter on many teams, and thus it made it slightly easier for DeBoer to make the switch. Still, this big decision in such an important moment opened up DeBoer to plenty of criticism if things went wrong.

Thankfully for DeBoer, Lehner made a few huge saves and kept the Golden Knights in the game. He let them hang around for long enough until they could find a way to win and he was arguably their best player. One of his best saves came when he denied rookie Cole Caufield’s breakaway attempt, keeping the deficit at one.

Now DeBoer will have to choose who to start for the next game and into the future. Both goalies have played well and he’s going to need to choose between riding Lehner, who has the hot hand, or going back to his veteran choice in Fleury.

The Canadiens have done an excellent job at shutting down the Golden Knights offense. Game 4 was yet another example of the Golden Knights’ struggles as they failed to muster up anything that resembled offensive pressure. They were lucky enough that the Canadiens couldn’t score to capitalize on their defensive performance, but more goals are needed.

There are some causes for optimism. Max Pacioretty set up the game-winning goal in overtime and each day results in more time for rest and recovery for injured center Chandler Stephenson. Still, the Golden Knights have been completely neutralized and if their offense can get back to what they know it can be, this series will have a much different feeling.