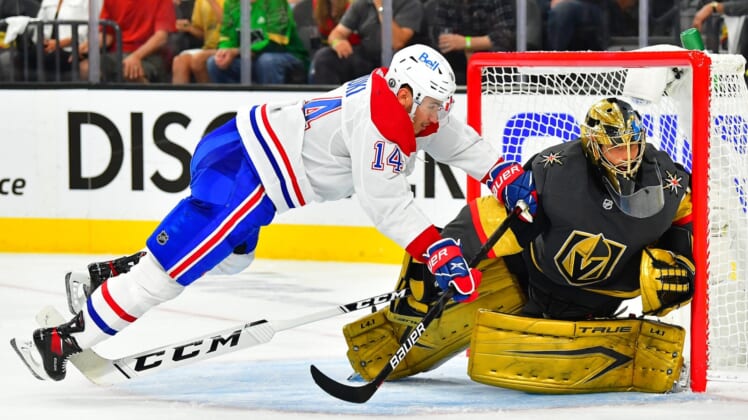 The Montreal Canadiens came out of the gates hot, putting the pressure on the Vegas Golden Knights early in the first period. Their heavy forecheck created some chances for the North Division champions, and it seemed as if the Golden Knights might be headed towards their third consecutive Game 1 loss of these playoffs. However, 60 minutes later, the Golden Knights were the ones with the last laugh as they pulled out a 4-1 victory.

It was a good start to a crucial semi-final series for a Golden Knights team looking to go to their second Stanley Cup in their first four years of existence. After a back-and-forth first period, the Golden Knights took control of the game and outplayed the Canadiens at even-strength to a large degree.

A second-period power-play goal from rookie Cole Caufield to cut the Golden Knights lead to 2-1 did give the Canadiens a brief flicker of hope. However, just under a minute later, the Golden Knights answered back when Mattias Janmark got his stick on a puck and redirected it into the back of the net. The response to the Canadiens goal was sudden and impactful as you could see the disappointment on the faces of many of the Canadiens.

The Golden Knights looked much better in the opening game of tonight’s series than they did in the previous round against the Colorado Avalanche. A large reason for that could be that they had a few days off, their last game coming on Thursday. This resulted in a much fresher Golden Knights team that had significantly more bounce in their legs.

The Golden Knights now have a 1-0 series lead, a position they haven’t been in yet during these playoffs. They will look to extend on that lead when they face off against the Canadiens once again on Wednesday.

It was well-known before this series that Carey Price and Marc-Andre Fleury are two of the best goalies in the NHL. Despite that, tonight’s game still was an extraordinary display of world-class goaltending as the two net-minders traded highlight-reel saves. Unfortunately, while the two were going back and forth with big saves, they didn’t have much time to admire their work as they quickly had to be ready to make the next big save.

“I don’t feel like I’m playing against Carey,” Fleury said after the game. “I need to worry about the shooters and the guys that are trying to score on me.”

Price especially made a few jaw-dropping saves that kept the Canadiens within striking distance. Among the best was this one on Mark Stone that was followed up with a wink.

While Price’s saves will likely be the ones on SportsCenter tonight, Fleury’s may have been more important. He subdued a few good chances early in the game that would have given the Canadiens an early lead. Who knows how this game would have gone if the Golden Knights were forced to dig themselves out of an early deficit?

Golden Knights offense from the blue-line

Three of the four Golden Knights goals tonight came from defensemen. It was an impressive offensive showing from a group that has helped out the forward core in a big way all season. It started when a howitzer from Shea Theodore broke a 0-0 deadlock in the first period. Defensemen Alec Martinez and Nick Holden would also add goals later in the game.

Having such a multi-layered attack makes the Golden Knights a much more dangerous offensive team. They are not reliant on only their star players or even their forward group to create scoring chances; instead, they get them from various places. This makes them much more difficult to defend.

Alex Pietrangelo was the only defenseman without a point tonight. However, despite his absence from the box score, his presence was definitely felt, and Theodore made sure to point out how he sets the tone for the entire defense group.

“He’s [Pietrangelo] great at joining the rush, making moves, finding open players, and I think that kind of gets them on their heels a bit,” said Theodore after the game.

Once they took the lead in the first period, the Golden Knights never allowed the Canadiens even to come close to getting back in the game. Instead, they shut things down and put on a masterclass in defending a lead. The Canadiens only managed to get five shots in the crucial second period and only reached 12 in the third because of a few last-minute scrambles.

Eventually, the Canadiens were forced to pull their goalie with well over four minutes remaining in a last-ditch effort to generate any offense. However, even with the man-advantage, the Canadiens struggled to get set up in the offensive zone as the Golden Knights got sticks and bodies in the lane.