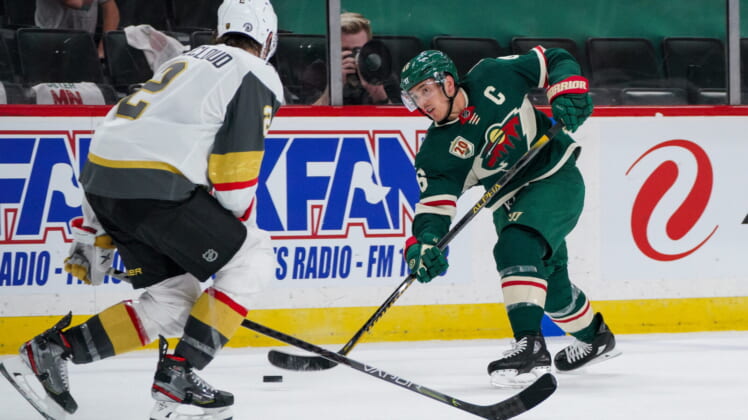 In a game that didn’t really begin until the third period, the Vegas Golden Knights could not figure out a way to crack the staunch Minnesota Wild defense, losing yet another close-out game 3-0. The loss means that they will host Game 7 on Friday night back at T-Mobile Arena, the location where they dropped Game 5. Vegas will be hoping for a better performance than they managed tonight, one where their only goal ended up being disallowed, swinging the momentum in favor of the Wild.

The Golden Knights have now blown a 3-1 series lead, instead allowing the Wild a chance at a winner-take-all Game 7. Anything can happen in one game and if the Wild manage to pull out the victory, there will be plenty of missed opportunities for the Golden Knights to lament.

As a team, the Golden Knights only managed to get 23 shots on net, and 11 of those were from defensemen Alex Pietrangelo and Shea Theodore.

The Wild are 3-0 all-time in Game 7s, but Golden Knights head coach Peter DeBoer sports a 5-0 record himself in the decisive games. The Golden Knights are going to need to alter their strategy for Friday’s game as what they’ve done over the past two games has been a massive failure. They need to find a way to get the Wild to make more mistakes and the best way to do that is to speed up the game.

The Golden Knights have stressed playing fast as one of their keys for victory throughout the series, but that’s something that we did not see tonight. Instead, they far too often walked directly into a Wild defense that they had allowed to set up. Over and over again, the Wild defenders made plays at the blueline to clog up the game and turn it into a physical grind. Their effort was rewarded.

The crucial moment in the game came in the third period when a failed Golden Knights challenge resulted in a wild powerplay. The Wild subsequently doubled their lead from one to two, effectively putting the game out of reach. The fans at Xcel Energy Center were going crazy and helped the Wild gain momentum. The Golden Knights will hope for the same support on Friday as they head home.

The Golden Knights were shutout for the second time this series, continuing the disturbing display of a complete inability to put the puck in the back of the net. Some credit must be given to the Wild who are one of the better defensive teams in the NHL and do have good defensive structure, along with Cam Talbot who has played well throughout the series, but at the end of the day it falls on the Golden Knights.

Mark Stone, who has scored in three straight games after a slow start to the series, had zero shots and only 0.02 individual expected goals. As a team, the Golden Knights only managed to get 23 shots on net, and 11 of those were from defensemen Alex Pietrangelo and Shea Theodore. The entire Golden Knights forward group managed a grand total of 10 shots and that’s including the two-minute powerplay.

While the Wild are a good defensive team, they also have depth to their scoring that is among the best in the league. They have skilled offensive players spread throughout their line-up and they will find ways to score goals. Thus, the Golden Knights can’t afford to have another weak offensive showing in Game 7. Instead, they need to be aggressive and break the game open with their speed and skill.

With the stakes so high in this elimination game, both teams were playing very physical hockey from start to finish. Midway through the second period Matt Dumba dropped Alex Tuch with a massive open ice hit, an impressive feat considering Tuch is listed as 40 pounds heavier. Alec Martinez wasn’t going to let Dumba skate away freely after that big of a hit and the two dropped the gloves shortly after, sending the Xcel Energy Center into a frenzy.

That wasn’t the only big hit of the game. Earlier in the game Marcus Foligno hit Zach Whitecloud against the boards, dislodging the glass and shaking up the Golden Knights’ defender momentarily. Both of these were playing simple hockey, getting the puck deep, and putting bodies on the puck-retrieving defenders, a classic playoff hockey recipe.

The Impact of Overturned Goals

The Golden Knights have been the beneficiaries of two overturned Wild goals earlier in the series but tonight they were the victims. With the Wild having just taken a 1-0 lead in the third period, a long shot from Chandler Stephenson beat Cam Talbot after a few minutes of sustained Vegas pressure to tie the game at one. After a moment of confusion, the referees signalled for no-goal due to goaltender interference from Alex Tuch.

This left head coach Peter DeBoer with a tough decision on whether he should challenge the goal. If his challenge was successful, the game would be tied at one in the third period. If his challenge failed, the Golden Knights would be assessed a two-minute minor and remain down a goal.

DeBoer decided to challenge. It didn’t take the referees long to uphold their call, keeping the score at 1-0 and giving the Wild a two-minute powerplay. Kevin Fiala, who was held scoreless through the first five games in the series, squeaked a shot through the legs of Marc-Andre Fleury to make it 2-0, giving the Wild a lead they would never relinquish.