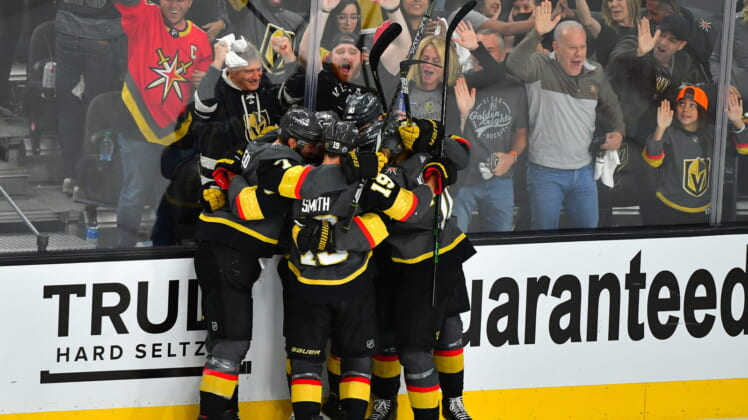 The Vegas Golden Knights had one of their most complete playoff performances to date as they completely overwhelmed the Colorado Avalanche, eventually winning 5-1, thanks to a big night by Jonathan Marchessault.

They [the line with Smith / Karlsson / Marchessault/] got hot at the right time,” said head coach Peter DeBoer, …they look unstoppable right now.

Marchessault was the story of Game 4 as he scored a hat trick, continuing his excellent play throughout this post season.

The Golden Knights have now fought back from being down two games to none and have tied this series up. It’s been a remarkable effort from a team that many were counting out after a weak Game 1 performance. Their recent play has really inspired a new sense of hope in the team’s chances and now the series is completely even.

The fourth line continued their great play tonight despite changes to the lineup that included the return of Ryan Reaves. While Reaves was on the ice at 5-on-5 the Golden Knights outshot the Avalanche 5-2 and outscored them 1-0 as they kept the puck deep in the Avalanche zone.

The game winning goal goes to Max Pacioretty who picked his spot with the perfect shot to give the Golden Knights an early 2-1 lead. He has been hugely impactful ever since his return from injury and continues to prove just how important his presence is.

It’s now a three game series but two of those matchups will be played on the road for the Golden Knights. Can they continue this great stretch of hockey they are having and use the momentum to get into the next round? The Avalanche are too good to go out this quietly and the last few games are sure to be a dogfight.

He scored his goals tonight in a variety of ways with the first coming on a greasy play in front of the net and another coming on a beautiful one-timer during a power play. He has fulfilled a role as a goalscorer that the Golden Knights have desperately needed, especially in recent times with their trouble finishing.

Marchessault has been in Vegas since the franchise’s birth and has been a key cog from the moment he arrived. Alongside Reilly Smith and William Karlsson, Marchessault has given the Golden Knights a line that has provided a level of depth scoring that the Avalanche haven’t matched.

“They [the line with Smith / Karlsson / Marchessault/] got hot at the right time,” said head coach Peter DeBoer, “…they look unstoppable right now.”

Heading into their most important game of the playoffs so far, the Golden Knights faced some adversity after they found themselves down 1-0 only a few minutes into the game. With the image of travelling back to Colorado on the brink of elimination very real, the Golden Knights dug deep and didn’t let that early goal demoralize them.

They scored five straight goals and refused to give the Avalanche an inch. It was the best performance of the playoffs thus far for the Golden Knights and they have now been the better team in three consecutive games, even if they only have two wins to show for it.

All the momentum has now swung back towards the Golden Knights for a series that has turned into a best-of-three. They will need to find a way to carry that momentum into Denver and win a game on the road, something that they have yet to do this series.

The Golden Knights won both games at T-Mobile arena in front of thousands of fans as restrictions on attendance have gradually been lifted. The building was shaking with noise and it’s clear that the home crowd gives the Golden Knights a significant advantage.

“It’s loud. It’s hard to hear anything in there. You can tell by my voice, just talking on the bench trying to call the next line, I’m losing my voice.” said Avalanche head coach Jared Bednar, “There’s a lot of noise in this building.”

The Golden Knights will need to win a game without that crowd supporting them as we take a look at what’s up next. Game 5 will be crucial in determining the momentum heading into the first elimination game of the series. The good news for the Golden Knights is that they’ve completely flipped the script on this series and will get to play at home in Game 6.

Game 5 is Tuesday night in Denver.