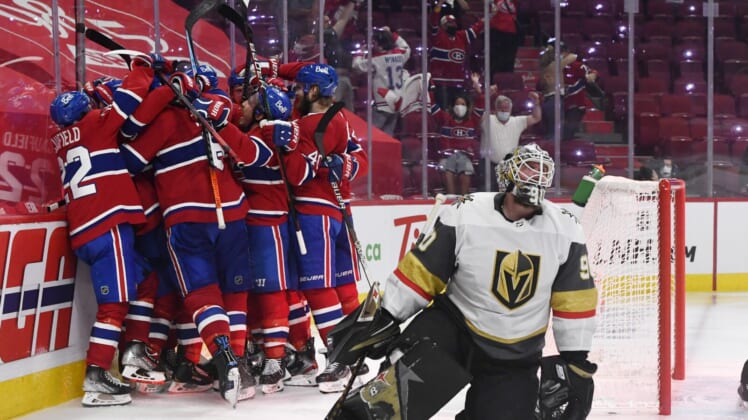 Playing for their lives, the Golden Knights couldn’t quite find a way to pull out the victory as they fell to the Montreal Canadiens 3-2 in overtime.

The Golden Knights never led throughout the game as they kept pulling even before falling behind again. It was a dissipating end to a season for a Golden Knights team hoping for their first Stanley Cup after reaching the conference finals in three of the last four years.

Artturi Lehkonen was the overtime hero after he finished off a pretty passing play. The Golden Knights had a few chances early in overtime but were unable to get past Carey Price, a theme that extended over the duration of the entire series.

For the Golden Knights, they now begin an offseason where they can do some soul searching to solve some of the issues that were exposed over this playoff run. Atop of that list has to be addressing the goal-scoring issues and the power play that failed them repeatedly. Those two problems are linked together and should be one of the Golden Knights’ top priorities.

“We have a really, really good team. We’ve been conference finalists now two times in a row. It’s [the Golden Knights franchise] a young team in the league that has had tremendous success,” said Robin Lehner after the game. “We had a hell of a season…all of us need to be a little bit better.”

“The Misfit Line” returns to form

Tonight “The Misfit Line,” the Golden Knights’ second line, got back to their game and were crucial for a team whose top players have yet to show up. Reilly Smith got the game’s first goal on a tip after a good forecheck and they generally controlled a large portion of the play and shots while they were on the ice.

The line played 13:43 of 5-on-5 time together, the most of any Golden Knights’ line, and was very effective during that time period. They outshot the Canadiens 15-6, outscored them 2-0, and controlled 74.19% of the expected goals. However, their success wouldn’t be enough to pull out the crucial victory. But, of course, their individual success doesn’t make this loss any easier.

“This is incredibly disappointing. This is one of, if not the, best team I’ve played on. To come up short is obviously really disappointing.” commented Smith after the game, “Proud of the way that guys battled. This is a great group.”

While the Golden Knights have some of the better numbers at even-strength in the NHL this season, one area they have been less than elite is on special teams. Throughout the playoffs, the discrepancy between their play at 5-on-5 and their play on special teams has become even larger and it has cost them games.

While their struggling power play has gotten most of the attention, their penalty kill has been far from excellent. However, in the playoffs, it often seems as if special teams success results in team success and the Canadiens have been the better team on special teams this series.

It cost them another game tonight as they couldn’t convert on any of their power play chances and allowed a goal while they were shorthanded. The Golden Knights were terrible on the power play for the entire series and it was their lack of goal-scoring that eventually did them in.

For two players that have been so great during the regular season and the beginning of these playoffs, Stone and Pacioretty’s disappearance has been hard to explain. It hasn’t been that luck hasn’t been on their side; instead, they’ve been bad.

In the end, it was the fact that the Golden Knights’ top players didn’t show up that was one of the main reasons for this disappointing loss. Despite their impressive depth, no NHL team will win a playoff series when their two top scorers from the regular season are held to a combined one point throughout the entire series.

Stone’s inability to make an impact was crucial to the Golden Knights losing this series as he is such an emotional leader. He is the type of player that, even when he isn’t scoring, can still usually make an impact in other ways, but that wasn’t the case during this series. This is the second consecutive season Stone has been ineffective deep in the playoffs.

“Their D [defensemen] play hard. They’re big they’re strong. Their forward group is responsible,” said Stone after the game. “I can praise them all I want but ultimately it falls on myself and the top players on this team.”

Taking responsibility is a good first step, but ultimately Stone will need to find a way to produce against defensive teams like the Canadiens, no matter what time of year it is.