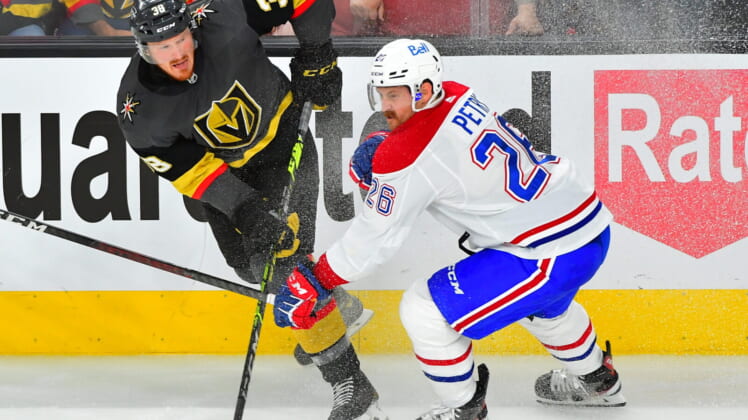 With a chance to take a commanding 2-0 series lead at stake, the Vegas Golden Knights came out flat and were never able to turn things around as they eventually fell to the Montreal Canadiens 3-2 in Game 2 of the NHL semifinals.

The Canadiens simply seemed like the hungrier team for important stretches as they won puck battles and races to 50/50 pucks. Their efforts were rewarded in a few early goals and from there they managed to shut things down.

Whether it was too much confidence after a big Game 1 victory, adjustments made by the Canadiens, or another unknown factor, the Golden Knights just didn’t have the energy level required to win a playoff game tonight. By the time they figured things out and began to put the pressure on the Canadiens, it was too little too late and they eventually ran out of time.

It was a disappointing loss for a Golden Knights team that showed they can score and control play against the Canadiens when they are locked in. The early focus issues were just too much to overcome in this game. Credit must be given to the Canadiens as well for their opportunistic scoring and ensuing strong defensive plays. Price was his usual fantastic self as he made many big saves to retain the lead.

They say that a playoff series doesn’t start until a team loses at home. Now that the Canadiens have forced the split, this series has officially heated up and there will be added pressure on the Golden Knights to take at least one game in Montreal. The journey across the border will be the first one for the Golden Knights since they played in the Edmonton bubble during last year’s playoffs.

Although the Golden Knights have been one of the best teams in the NHL over the past few seasons, they have refused to become complacent with their roster. Last offseason they went out and signed Alex Pietrangelo in a deal that has a total value of over $60 million. It was a big pickup for a Golden Knights roster that was already one of the strongest top to bottom in the league and the large-cap hit required some reshuffling of players.

While Pietrangelo is a great two-way defenseman, his talent and skill was far from the only reason the Golden Knights made him such a high priority. Pietrangelo captained his former team, the St. Louis Blues, for four years and was the leader during their Stanley Cup victory in 2019. His playoff experience and leadership were desirable qualities in the eyes of the Golden Knights.

Throughout these playoffs, Pietrangelo has proven that the investment was well worth it and tonight was yet another example. He was the only goal scorer for the Golden Knights as two of his point shots managed to beat Carey Price. He has been a steady presence on the blue line for the Golden Knights for this entire playoff run, and his experience in past years makes him a valuable off-ice resource.

Striking first crucial in this series

The Canadiens have scored first in each of their nine wins during this playoff run. Scoring the first goal has been crucial to their success throughout the playoffs and if the Golden Knights want to advance, they’re going to need to find a way to strike first.

The issue is that the Golden Knights have been slow starters throughout these playoffs. Too often they have played down to their opponent’s level in the first period before figuring out their game and controlling the last forty minutes. This means that they have had to play from behind and pull off a few comebacks.

Tonight’s game was a great example of why that strategy is not sustainable. Facing a goalie like Price, the Golden Knights ran out of time on their comeback attempt. Even though they were getting multiple scoring chances towards the end of the game, the clock struck midnight and they were still searching for the equalizer.

Chandler Stephenson did not play in tonight’s game so Nic Roy took his place in between Mark Stone and Max Pacioretty. Stone and Pacioretty were excellent in the first two rounds of this playoff run and contributed in all facets of the game, including some huge goals.

Through two games in this series, the duo has not scored. In fact, of the Golden Knights’ six goals so far only one has come from a forward. The absence of their forwards has been holding the Golden Knights back from reaching their true potential in terms of offensive play. On the flip side, it’s an encouraging sign that they have still remained competitive and scored six goals across the two games without contributions from their top guys.

Heading back to Montreal, the Golden Knights will need to get goals from their top players if they want to get a win. Your best players are your best players for a reason and if they fail to show up in as crucial a series as this one, then management will have to think long and hard about the direction of the franchise.