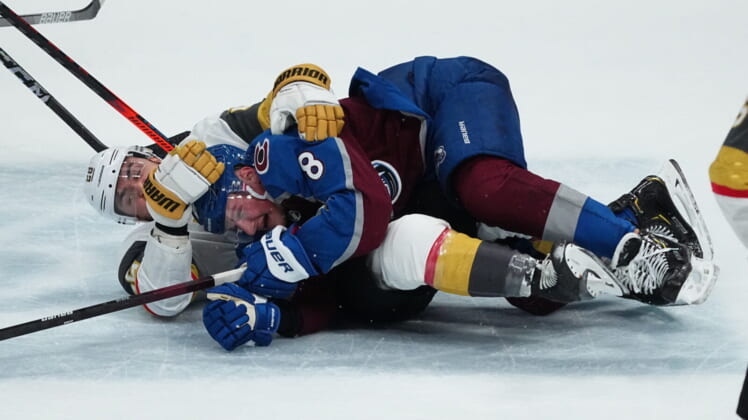 It was an anti-climactic opening game for the Vegas Golden Knights as they began their second-round NHL Stanley Cup playoff series against the Colorado Avalanche on Sunday in Denver. Vegas never found their footing and the Avalanche dominated from start to finish with a resounding 7-1 win.

Despite the seven goals allowed, the blame for this loss falls far from the feet of Lehner. The defensive play in front of him was far from adequate to secure a victory as the Avalanche put the pressure on all game.

The goals came early and they never stopped as the Golden Knights struggled to keep up in a game where they looked thoroughly outmatched. If this game was a sign of anything to come, the Golden Knights may be put out of their misery quickly.

The Golden Knights continued their trend of slow starts and the Avalanche took full advantage, scoring a few early first period goals after capitalizing on defensive miscues. At points it seemed as if the Avalanche were putting on a passing clinic as they moved the puck around the offensive zone before putting it in the back of the net.

Game 1 couldn’t have gone much worse for the Golden Knights. But, at the end of the day, there’s no difference between losing 1-0 and 7-1. Both results leave the Golden Knights down 1-0 in the series and now it’s crucial to regroup and prepare for Game 2.

Golden Knights get physical in garbage time in the third period

While the game was largely a showcase of the top hockey talent in the world, there was also plenty of physical play as is expected for a playoff game.

Despite being on the wrong end of a lopsided score, the Golden Knights were not going to go down without some type of fight. The third period was especially physical and it included a nine-minute power play for the Avalanche after a Ryan Reaves match penalty for displaying the intent to injure.

The Golden Knights are going to need to regroup and refocus before Game 2. Another performance like tonight and they may find themselves in a hole that’s too deep to climb out of against such a good team. If they can pull out a win in Game 2, memories of tonight’s game will fade quickly as they prepare for a series that is shaping up to be a dogfight.

After a great first round in which he started all seven games, Marc-Andre Fleury was given a chance to rest tonight and head coach Peter DeBoer started Robin Lehner in his place. The two goalies shared duties this season and it seemed likely that Lehner was going to get playoff action at some point.

The Avalanche scored seven goals on Lehner, though on many of those the goalie had no chance at all. Still, in retrospect it seems like a large mistake to have gone away from Fleury who was excellent for the large majority of the first round.

The two goalies have shown great camaraderie all season as they’ve cheered each other on, no matter who was getting the bulk of the starts. Fleury made sure that Lehner felt his support after coming off the ice in tonight’s game.

Despite the seven goals allowed, the blame for this loss falls far from the feet of Lehner. The defensive play in front of him was far from adequate to secure a victory as the Avalanche put the pressure on all game. No matter who starts in net for the future games, the Golden Knights will need to play much better if they want a chance at victory.

Avalanche skill stands out above all

It’s no secret that the Avalanche have an abundance of skilled players, even the Golden Knights were discussing that point heavily before the series began. Still, tonight was an in-person introduction to the world-class skating, passing, and shooting on the Colorado roster.

Small defensive mistakes were exposed in an instant, resulting in another Avalanche goal before the Golden Knights found their bearings. It was a harsh adjustment from a Minnesota team that, while very good, didn’t posses anywhere near the same level of goal-scoring ability as the Avalanche do.

The Avalanche look like a juggernaut that is headed for the Stanley Cup and the Golden Knights are going to need to be much, much better if they want any chance at advancing to the next round. That starts with limiting the time and space that the Avalanche stars are given, something that no team in the NHL has figured out to do this season.

Once the hockey game was over, the rest turned into a mishmash of questionable hits and dangerous plays. There were plenty of penalties handed out and the physical side of tonight’s game will have an impact on the Golden Knights’ lineup for Wednesday’s game. It started with a hit by Ryan Graves on Mattias Janmark, hero of Game 7 with his hat trick, who left the game after a dangerous-looking play.

“Defenseless player, that’s a blindside and interference,” commented Golden Knights captain Mark Stone. “Trying to get those out of the game.”

Janmark’s status is still unclear but if he is missing from the lineup on Wednesday that will be a big blow for the Golden Knights. Besides him, Max Pacioretty and Reaves both were penalized for questionable hits of their own where they made a play on a defenseless skater. Reaves will almost surely be suspended and unavailable for Game 2 and Pacioretty’s play will be looked at by the league as well, though he’s much less likely to see disciplinary action.

There will be a two-day break before Game 2 on Wednesday and it’s a welcome respite for the Golden Knights who need to rest and regroup. The rest will be well-appreciated by a Golden Knights team that only got one day off between an emotional Game 7 and tonight’s game. The puck drops at 7 PM PDT Wedensday.