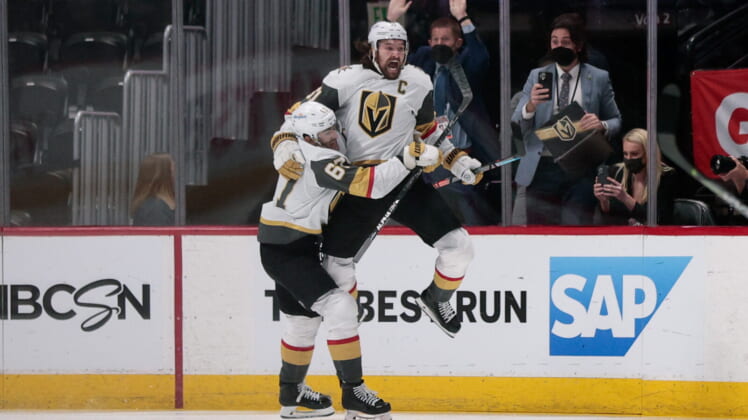 Heading into the third period, all seemed lost. The Vegas Golden Knights were being outplayed heavily and were down two goals, a lead that seemed even larger as their offense had been struggling all night. Over the next period and a bit, the Golden Knights pulled off a monumental comeback that completely shifted the momentum of this series. Captain Mark Stone scored the overtime winner, and the Golden Knights win 3-2 in overtime and will now return to Vegas with a chance to send the Colorado Avalanche packing.

Considering they lost the first two games of this series, the three straight wins by the Golden Knights have been an unexpected but welcome development. The team has leaned into the underdog role that is unfamiliar for a team that was atop the NHL standings for much of the year, but they’ve done it effectively and are now on the brink of advancing to the next round.

They will have two chances to eliminate the Avalanche, one at home and one on the road. The Golden Knights have played very well at T-Mobile Arena this year, and in this series, they have been excellent at home, winning both games there. The 18,000 fans that are going to pack “The Fortress” (as it is known) are sure to be loud and are going to make their presence felt, though, at the end of the day, it’s going to come down to the team’s ability to execute their game plan.

Playing as they did in the second half of tonight’s game will be enough to advance in this series, even if they did have the benefits of a bit of puck luck. Still, the Golden Knights showed that when they take matters into their own hands and attack the Avalanche, they are better. They must not show too much respect and instead get physical and become the aggressors.

We’re on the road so he controls those matchups. The matchup thing for me is overblown. The analytics say this and say that but we’re here in this position because of our depth and our ability to play six defensemen.

If they manage to do this, they have the Montreal Canadiens waiting for them in the next round. For now, that series is far from everyone’s mind as the President’s Trophy champions Avalanche are not going to go down without a fight.

One of the themes of the two previous games in Las Vegas was how well the Golden Knights neutralized Colorado’s top line. One of the ways they did this was to take full advantage of the last change offered to the home team that allowed Peter DeBoer to choose his matchups. DeBoer opted to use his top line with Selke Trophy nominee Mark Stone to defend the Avalanche’s top line and that strategy was successful.

DeBoer was not afforded that opportunity to match lines tonight and instead it was Avalanche coach Jared Bednar’s turn to make a chess move. He kept his top line (which he reshuffled slightly to have Brandon Saad instead of Gabriel Landeskog) away from Stone and tried to let them feast on the other Golden Knights lines that are much weaker defensively.

The Avalanche’s top lines fared much better tonight against weaker competition. While the top line (Saad/Nathan Mackinnon/Mikko Rantanen) was on the ice at 5-on-5, the Avalanche outshot the Golden Knights 8-5 and out-chanced them 9-4. After the game, DeBoer preached a team perspective instead of worrying too much about individual matchups.

“We’re on the road so he controls those matchups,” said DeBoer after the game. “The matchup thing for me is overblown. The analytics say this and say that but we’re here in this position because of our depth and our ability to play six defencemen.”

For the first two periods of this game, it seemed as if the Golden Knights were going to roll over and accept defeat. The Avalanche attacked in waves and the Golden Knights were lucky that they finished forty minutes down by only two goals. The deficit could have been much larger if it were not for a few big saves and many fortunate bounces.

“Fleury kept it at a two-goal game, and that’s what we needed him to do. He made some really big saves, especially in the second period,” said forward Alex Tuch after the game. “We wanted to help him out. He’s helped us all year long.”

Everything changed when an Avalanche turnover ended up behind Phillip Grubauer early in the third period. The goal seemed to give the Golden Knights new life, and they picked up the intensity. This continued a trend that the Golden Knights have shown throughout this playoff run where they fail to show the energy necessary until they score one goal, often digging themselves into holes they then need to climb out of.

A few minutes later, the Misfit Line came through with a big goal of their own to tie the game. A pretty passing play was finished off at the side of the net by Jonathan Marchessault. He has been on fire recently as he had a hat trick in the last game and tonight’s goal marked his sixth playoffs. Heading into overtime, the Avalanche had taken back some of the momentum and had many good chances that Fleury was forced to turn away.

Heading into overtime, the Golden Knights were looking for someone to step up and score the game-winner. Who would be the one to get them this all-important road win?

Captain Mark Stone shows up when needed most

When the Golden Knights needed someone to step up, who else but Mark Stone would fit the bill? After being named the first captain in franchise history earlier this year, Stone has continued to display excellence in everything he does in all facets of the game.

Despite being near the end of his shift, Stone capitalized on an opportunity to rush in on Grubauer alone. He picked his target and fired the puck into the back of the net, changing the storyline of this series in an instant. It was yet another example of Stone’s superhuman work ethic and grit.

“He was exhausted, and you saw how hard he skated down the ice,” said Tuch after the game. “He’s the heart and soul of this team. He’s the captain that we’ve always wanted.”

Stone has been his usual self, a dominant two-way force with his fingerprints all over every game he plays in. Heading back to Vegas for a possible series-ending Game 6, Stone will likely once again be asked to match up against the Mackinnon line while still providing offense. From what we’ve seen, he’s going to be up to the task.