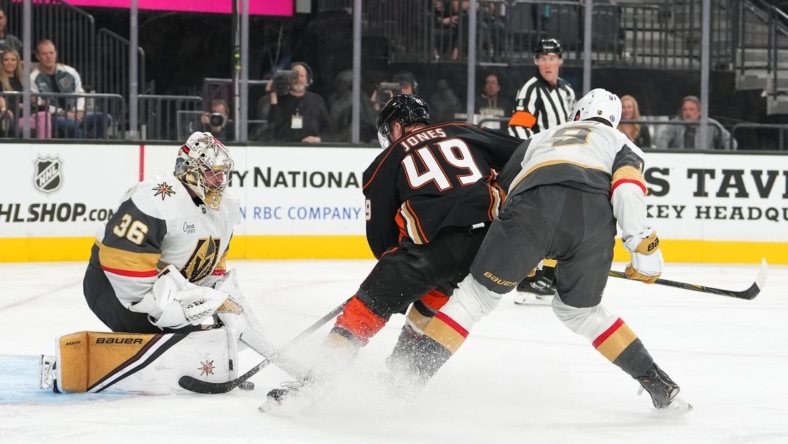 Logan Thompson made 29 saves for his second shutout of the season to help lead the Pacific Division-leading Vegas Golden Knights to their third straight victory with a 4-0 win over the Anaheim Ducks on Friday afternoon in Las Vegas.

It was the third career shutout for Thompson who improved to 4-2-0 on the season while also becoming the first goaltender in the NHL with two shutouts this season.

Reilly Smith and William Karlsson each had a goal and an assist and Chandler Stephenson and Nicolas Roy also scored goals for Vegas which improved to 21-4-0 all-time against Anaheim.

John Gibson stopped 14 of 18 shots for Anaheim which dropped its seventh straight game since a season-opening 5-4 overtime victory over Seattle on Oct. 12. Gibson, pulled after the second period for Anthony Stolarz, fell to 3-15-5 all-time against Vegas. Stolarz finished with three saves on three shots.

Vegas took a 1-0 lead at the 15:12 mark of the first period on a power-play goal by Stephenson who skated in alone from the right corner to the front of the net where he beat Gibson five-hole for his fourth goal of the season.

The Golden Knights then broke the game open with three goals over a four-shot span in the second period. Smith started the barrage with a short-handed goal, one-timing a Karlsson pass from the right circle at the end of a 2-on-1 break for his second goal of the season and 100th goal as a member of Vegas.

Karlsson made it 3-0 with a waist-high deflection at the hash marks off a Jonathan Marchessault slap shot from the right point past Gibson’s glove side for his fourth goal of the season.

Roy then increased the lead to 4-0 at the 18:47 mark of the period when he took a pass from Nicolas Hague at the blue line and broke past a pair of Anaheim defenders before firing a wrist shot past Gibson’s glove side for his second goal of the season.