The Vegas Golden Knights remain a perfect 9-0 in overtime this season as they down St. Louis 4-3. 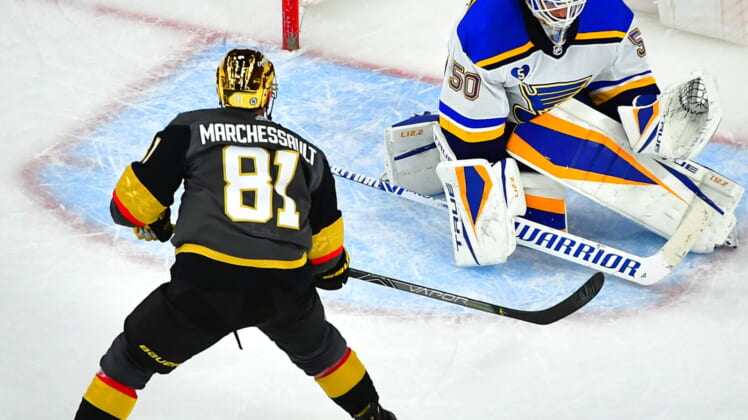 Vegas Golden Knights get big win at home against St. Louis in a thrilling overtime win in front of NHL’s largest post-COVID crowd

If you’re an NHL opponent of the Vegas Golden Knights, overtime isn’t something you look forward to.

With just 18 seconds remaining in overtime, Jonathan Marchessault slapped home a wrist shot for the win, two points, and momentum heading into the Stanley Cup Playoffs. The Golden Knights came from behind two goals to tie the game in regulation and bring home the win in front of the hometown crowd at T Mobile Arena.

The Golden Knights move to 9-0 in bonus frame hockey continuing their 3-on-3 dominance this season. It’s helped them win the Western Division and stay a step ahead of rival Colorado.

The Blues did clinch a playoff berth in the loss to the Vegas Golden Knights, gaining the one point they needed to reach the post-season.

Vegas was also helped by the goaltender Robin Lehner who recorded 22 saves in the win. Lehner, who expressed disappointment with his recent struggles in Minnesota, was lights-out for Vegas on Friday night. He had allowed six goals against the Wild in his last start and expressed relief he was able to bounce back and come up with key stops against the Blues in the overtime victory.

“it’s no secret the last couple of games, Minnesota, and today, I let in some goals that weren’t really good,” Lehner said during the post-game presser. “(I) Just took a breath in the second period and tried to go out there and do my best. We have a special group here. Everyone came here and we did what we needed to do.”

The Vegas Golden Knights were also aided by a raucous crowd of 7,567 – the largest to see an NHL game this season. Vegas was just allowed to reopen T Mobile Arena to 50-percent capacity coming out of the COVID-19 restrictions in Nevada.

St. Louis’ Jaden Schwartz gave the Blues a two-goal advantage at 16:18 of the second period to give the Blues a 3-1 advantage, but Vegas’ Alec Martinez scored from the point with just 10 seconds remaining in the second to cut the lead to one at the end of two.

Nicolas Roy then tied the game for Vegas in the 3rd period to make it a 3-3 game which it stayed heading into overtime.

The Golden Knights host the Blues again Saturday night at T Mobile Arena before a Sunday off with rival the Colorado Avalanche coming to Las Vegas Monday for the final regular season meeting between the two. Vegas then ends the regular season on the road in San Jose against the Sharks on Wednesday.