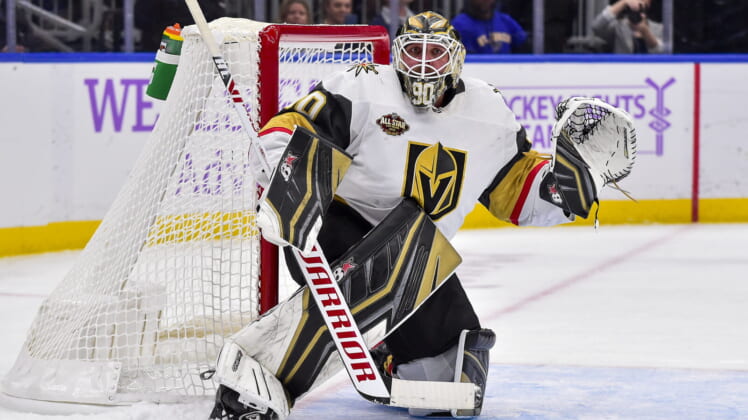 After opening a lead less than a minute into the game and doubling it soon after, the Vegas Golden Knights dropped the first game of their road trip 5-2 to the St Louis Blues. The pace was hectic the entire game as the two teams traded high-quality scoring chances back and forth. The goalscorers for the Golden Knights were Chandler Stephenson and Reilly Smith.

It was a sloppy performance from the Golden Knights who gave up their multi-goal lead just as fast as they acquired it. Once the Blues took the lead, they did a good job of slowing the game down and playing a slightly tighter style. When they got a second-period power play, they took advantage of it and doubled their lead. A final goal in the third period put the game away.

“We got the start we wanted for a change, and we talked about that,” said head coach Peter DeBoer after the game, “and we let them back in the game.”

Shea Theodore returned to the lineup after leaving the game against the Carolina Hurricanes the other night early after falling awkwardly into the boards. He played alongside Brayden McNabb and the two were one of coach DeBoer’s top pairings throughout the entire game, just as usual. 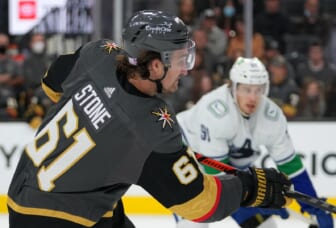 The Golden Knights had firm control of this game as they had an early 2-0 lead before they conceded three goals in a period of just over two minutes. It was Ryan O’Reilly who got the scoring started for the Blues after he converted a sharp angle shot against Robin Lehner.

“Made some mistakes, took some penalties, just a recipe for disaster when you’re on the road.” commented DeBoer.

That stretch in the first period ended up deciding the game as the Golden Knights could never fight their way back. Despite a burst of energy at the start of the third period, the Blues were too solid defensively and goalie Jordan Binnington cleaned things up after a messy first five minutes.

This was the third straight game that Reilly Smith scored in and tonight his goal came early in the game on a breakaway. Smith has been excellent during this last stretch and has been a big boon for the Golden Knights as he’s been playing like a top-line forward.

The line of Smith alongside Mattias Janmark and Nicolas Roy was the most effective one for the Golden Knights tonight. At 5-on-5 while they played the Golden Knights controlled play to the tune of 12 scoring chances created to only 4 allowed.

With Jonathan Marchessault and William Karlsson still unavailable, Smith has done a remarkable job at performing well without his regular line mates. If coach DeBoer is sufficiently intrigued, he might consider splitting up that iconic line upon their return.

Robin Lehner allowed five goals tonight and while none were egregious errors, it still wasn’t his best performance of the season so far. He’s someone who has been giving the Golden Knights standout performances on a regular basis, but tonight wasn’t one of them. Saying that, he did make a few big saves that kept the Golden Knights within shouting distance before the Blues widened their lead.

Late in the third period, Lehner was crashed into by Pavel Buchnevich. The collision seemed to shake Lehner up for a second but he did d continue to play the rest of the game. It was a moment of relief for the Golden Knights when he did stand back up.

The Golden Knights play their next game in Nashville against the Predators on Wednesday night. The puck for that game drops at 5 PM Pacific Time.