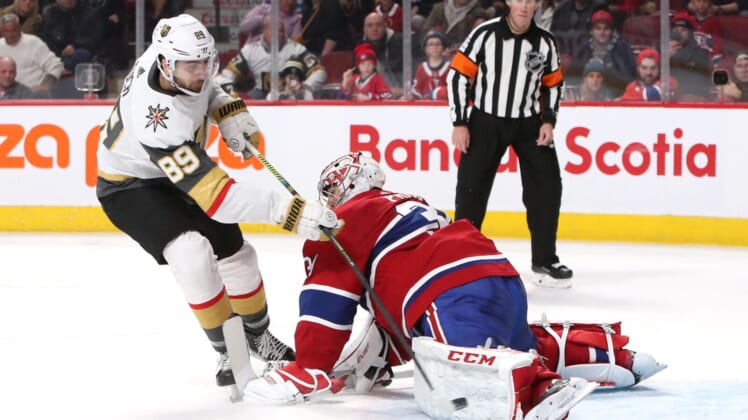 After a hard-fought battle against the Colorado Avalanche, the Vegas Golden Knights face off against the Montreal Canadiens for a Stanley Cup finals trip.

This is the third time in four years that the Golden Knights have made it to this stage of the playoffs, and they’ve won once and lost once. The winner of this series will play against the winner of the other semi-finals that feature the New York Islanders and the Tampa Bay Lightning.

The Golden Knights have now made it out of the West Division. After only playing against the same seven teams all year, the Golden Knights proved that they were the strongest out of that group. It’s an impressive achievement considering the Avalanche won the President’s Trophy and the Minnesota Wild, who the Golden Knights beat in the first round, were only seven points behind.

This series against the Canadiens will mark the first time that the Golden Knights have played someone outside their division this year. Depending on how these games go, it will give everyone a good idea of the relative strengths of the North and West division are equal or if the North Division consists of much weaker teams, as some people have theorized.

The Canadiens haven’t had an easy path to the semifinals. They came back from down 3-1 against the vaunted Toronto Maple Leafs in the first round, eventually winning in seven games. In Round 2, they played a Winnipeg Jets team that had defeated Connor McDavid and the Edmonton Oilers. The Canadiens made it look easy as they swept the Jets by winning four straight games.

The Golden Knights enter this series as large favorites, but that doesn’t matter once the game starts. They should know better than anyone that the NHL playoffs are built for underdogs as they played that role themselves in the last series against the Avalanche, erasing a 2-0 deficit to win the series 4-2. To win this series against the Canadiens, the Golden Knights will have to do these three things:

For those that thought Carey Price was past his prime, you thought wrong. Price has shown that he is still among the best in the world when it really counts, as he has been spectacular throughout this playoff run. He is currently rocking an 8-3 record with a 1.97 goals-against average and a .935% save percentage, great numbers for the 33-year old goalie.

The Golden Knights have had their struggles scoring at points, and they have yet to meet a goalie of Price’s caliber. Even though Phillip Grubauer, the Avalanche’s goalie, is a Vezina Trophy nominee, he’s not on Price’s level when it comes down to stealing wins for his team.

Price is the type of goalie that can completely shift a game, or even a series, with a few big performances. If the Golden Knights cannot find a way to solve him early in the series, they may find themselves traveling back to Montreal facing a series deficit.

The Canadiens have relied on youth upfront for a solid part of their offense. These young players have been inserted into the lineup, and they have made a huge impact despite their age, kickstarting the Canadiens’ offense and giving the team a more well-rounded attack.

Among the best of them is Cole Caufield, the diminutive sniper that joined the professional ranks late this season after tearing up the collegiate level. Caufield is a shifty skater that has a great shot. He’s a natural goal scorer that is starting to look more comfortable with every passing game.

Nick Suzuki is a young player that Golden Knights fans should know of as he was a part of the organization before being traded in the Max Pacioretty deal. Suzuki has also taken strides in his development and has scored a few huge goals during this playoff run already.

The Canadiens are a great defensive team that is led by captain Shea Weber. While Weber provides a bruising, veteran presence on the blue line, he’s far from the only player on the team that excels at frustrating opponents. The Canadiens have a rock-solid defense group that has stifled electric offenses like Maple Leafs and Jets in previous rounds.

They also feature some of the league’s best defensive forwards, notable Phillip Danault. Danault has developed a reputation as someone that can take away an opponent’s most dangerous players, and for good reason as he has constantly proven himself up to the challenge.

The Golden Knights can negate some of the Canadiens’ defensive ability by refusing to play with structure. Attacking on the rush, something the Golden Knights are always trying to do, is a great way to transition and open the game.

The puck drops tonight at 6 PM PT in Las Vegas.