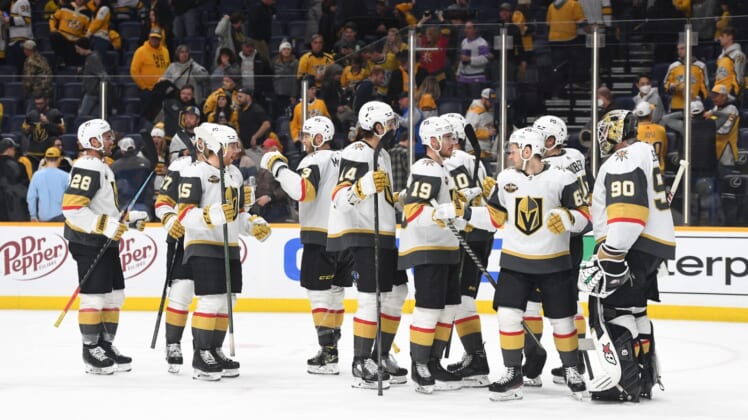 The Vegas Golden Knights got contributions from their star players in a victory against the Nashville Predators. The game ended 5-2 as Mark Stone, Alex Pietrangelo, and Chandler Stephenson all scored. This was the second and final game of the Golden Knights mini road trip as they now will head back to Vegas to face the Edmonton Oilers on Saturday.

The Predators had an early goal waved off after the Golden Knights challenged for goaltender interference. It was ruled that Thomas Novak had too much contact with Robin Lehner and thus Fillip Forsberg’s goal was overturned. However, the Predators Swedish forward would score one that counted later in the game.

Lehner had another great performance tonight as he turned away 26 of the 28 shots he faced. He stopped all the medium and low danger chances he faced at 5-on-5 as he provided a steady presence once again.

“Sometimes you let in a goal at a bad time, but he’s [Lehner] done the complete opposite.” said Stone after the game, “He’s made the big save at the right time.”

The Golden Knights are rolling and making their way towards the top of the Pacific Division standings. This is a scary team when things are going their way and they aren’t afraid of anyone. After a few years where they got close but couldn’t get over the edge, this team is determined to make another deep run. 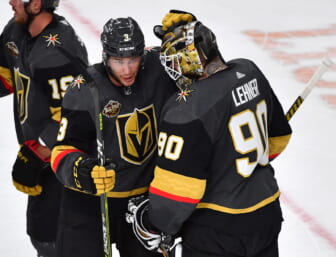 This was Max Pacioretty’s return to the lineup as he played for the first time since being injured. The Golden Knights are finally getting some of their players back and they are starting to look like the team that everyone expects them to be.

Pacioretty played alongside Mark Stone and Chandler Stephenson as head coach Peter DeBoer reunited the first line that played together for the vast majority of last season. Pacioretty managed to pick up one assist and the line outshot the Predators 9-5 at 5-on-5.

“It was a little exhausting the first-month losing guys, but now it’s getting exciting getting guys back in the lineup.’ said captain Stone postgame.

A complete effort for Vegas

This was one of the Golden Knights most solid games of the season so far. They were clearly the better team and fully earned the two points that were at stake.

“I really liked our game tonight.”, said head coach DeBoer, “Obviously getting some of those guys back in the lineup gives us a different look and feel.”

The Golden Knights controlled 58.22% of the expected goals in this matchup, showing that they were firmly in control and had the majority of the scoring chances. They got scoring from a few different lines and newcomer Adam Brooks got his first as a Golden Knight.

The Golden Knights play their next game on Saturday against the Edmonton Oilers. The puck drops for that game at 4 PM Pacific Time.