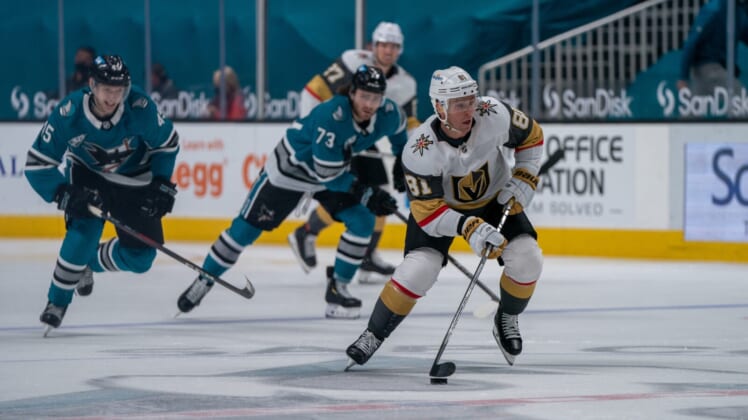 The Vegas Golden Knights dominated the Sharks to cap off their best season in franchise history. There’s only one question left to answer: will they be able to carry over their success to the playoffs?

The goals came early and they came often. Vegas Golden Knights’ defensemen Alex Pietrangelo opened the scoring just under four minutes into the game and from there they never let their foot off the gas, eventually winning by a final score of 6-0.

While the score was lopsided enough, it may not have displayed the total dominance of the Golden Knights as they were in complete control from start to finish. They ended the game controlling 70.83% of the high danger scoring chances at 5-on-5, never getting into too much trouble. Marc-Andre Fleury stopped all of the limited chances he saw, recording his 67 career shutout in the process. With that, he passed childhood hero Patrick Roy on the all-time shutout list where he now sits 15th. This is only a few months after he passed the recently retired Roberto Luongo for third place on the all-time wins list.

The win marked the eighth victory for the Vegas Golden Knights over the Sharks in eight meetings this season. The two franchises have trended in very different directions since their heated 2019 first-round playoff series that saw Las Vegas blow a lead in a dramatic Game 7. The Golden Knights are one of the favorites to contend for the Stanley Cup while the Sharks are lottery-bound, dealing with the consequences of past win-now moves that hampered their future.

In addition to the team’s success, there were a few standout individuals that had exceptional seasons for the Golden Knights. Goaltenders Marc-Andre Fleury and Robin Lehner split the William M. Jennings Trophy, awarded to the goaltending duo with the lowest combined goals-against average. Vegas Golden Knights Head coach Peter DeBoer will have a difficult decision to make on who will be the team’s starter going forward, or if the two veterans will split the playoff starts.

Looking Ahead to the Playoffs

It was a strong way to end the season for the Golden Knights and they will now turn their attention to the upcoming playoffs. They finish the regular season with a 40-14-2 record, one that is currently enough for top place in the NHL, but it might not stay that way for long.

A 2-1 loss to the Colorado Avalanche on Monday meant that the Vegas Golden Knights lost full control of their own destiny, instead of giving the Avalanche the chance to steal the top seed by winning two straight games against the lowly Los Angeles Kings.

The Avalanche played the first of those two games during the Golden Knights/Sharks game tonight, winning easily as they had built a 6-0 lead in only the second period. Those two teams will play each other once again tomorrow in Colorado. An Avalanche win will mean that they leapfrog the Golden Knights due to owning the tiebreaker, denying Las Vegas their first-ever Presidents’ Trophy.

While the Presidents’ Trophy may be a mostly meaningless trophy that only serves to add pressure to the top team, an Avalanche win would also mean that the Golden Knights would relinquish something much more valuable. The team that finishes first in the division will face the St. Louis Blues in the first round, while the second-place team will face the Minnesota Wild.

If the regular season is any indicator, the Golden Knights would much rather see the Blues in the first round as they struggled mightily against Minnesota. They won just three of the eight contests versus the Wild, and when compared to the six of eight they won against the Blues, it’s clear which team they would rather face.

It’s the Vegas Golden Knights’ fourth playoff appearance in four years as a franchise, but their first where they enter the playoffs with such high expectations. Management used last offseason to continue to improve on an already successful roster, bringing in Stanley Cup champion Alex Pietrangelo and expectations are that moves like this will result in a deeper playoff run.

For now, the Golden Knights are forced to wait and see which team they will be matched up against in the first round. Considering past performances, there’s sure to be a lot of Los Angeles Kings’ fans in Las Vegas tomorrow.