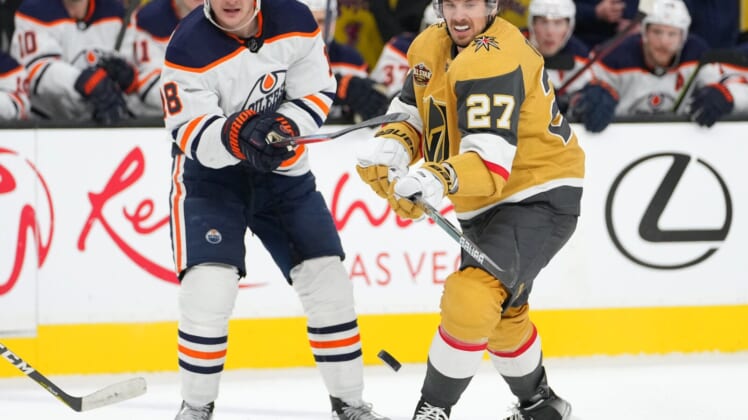 The Vegas Golden Knights dropped their final game of November as their comeback effort was shut down by the Edmonton Oilers. The final score was 3-2 for the visiting team despite goals from Chandler Stephenson and Reilly Smith. This was a battle between two of the best teams in the Pacific Divison and the Oilers did just enough to steal the two points at stake.

For the Golden Knights, tonight’s contest actually marked one of their more solid all-around efforts of the season so far. They looked like the better team for most of the night and were downright dominant for significant stretches in the second half of the game. It was Oilers goalie Mikko Koskinen making 36 saves as well as a few opportune goals from the Canadian team that made the difference in this one.

The Golden Knights even managed to keep superstars Connor McDavid and Leon Draisaitl off of the scoresheet. Those two are at the top for most points of any NHL skaters so far this season and usually are the ones powering the Oilers to victory. Tonight, it was the supporting cast that downed the Golden Knights as they did a great job of preventing those two from getting going. Prior to this game, the Oilers were 5-19-4 when McDavid failed to register a point over the last three seasons.

The Oilers have two of the best individual talents in the world in McDavid and Draisaitl who can both change the momentum of a game with a wonderful individual effort. As a result, the Oilers play an attacking brand of hockey that allows their best players the most opportunities to be creative and create offensive chances. This is in contrast to the way that the Golden Knights usually try to play where they’re more solid defensively.

“We’ve got to recognize who we are playing against; one of the best transition teams in the league.” said goalie Robin Lehner after the game, “That’s not typical Vegas hockey.”

The Golden Knights clearly struggled with this in the first part of the game as they allowed way too many odd-man rushes, leaving Lehner out to dry multiple times. There were a few different instances where defensemen got caught up ice and the Oilers made the Golden Knights pay going the other way.

Looking back at the causes for the Golden Knights playoff exits over the past few seasons reveals an interesting trend. There have been far too many series where they have gotten the majority of the scoring chances and been the aggressors yet have been unable to convert those scoring chances into goals. They’ve suffered from a severe lack of finish.

Against the Oilers, that familiar demon reared its ugly head. The Golden Knights managed to get 38 shots but only scored twice as Koskinen made several big stops. While you’re going to run into a hot goalie on occasion, it happens way too much for the Golden Knights to ignore.

One of the big knocks against the Golden Knights has been their lack of a true number one center. While they’ve solved that issue by trading for superstar Jack Eichel, he won’t be healthy for at least a few months and so it’s Chandler Stephenson who is staying in that role. Once a role player with the Washington Capitals, Stepheson has experienced a career resurgence with the Golden Knights.

This season has been his best one to date as he has recorded 20 points in 21 games played. He scored the first goal for the Golden Knights against the Oilers.

This helped the Golden Knights reduce the deficit but in the end it was too much to overcome. Still, the team should be confident that upon Eichel’s return they will have the most organizational depth at center they’ve ever had since they entered the NHL.

The Golden Knights play their next game on Wednesday, December 1st against the Anaheim Ducks at T-Mobile Arena. The puck drops for that one at 7 PM Pacific Time.