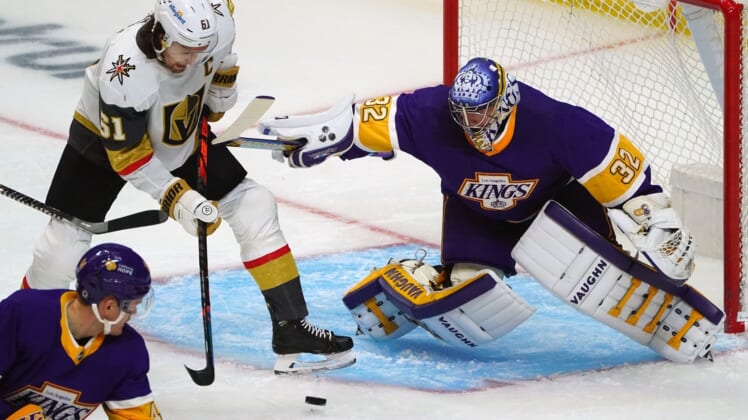 Max Pacioretty and Tomas Nosek both collected one goal and two assists to pace the visiting Vegas Golden Knights to a 6-2 victory over the Los Angeles Kings on Wednesday.

Mark Stone and Alex Tuch netted one goal and one assist apiece in the win, while Chandler Stephenson and Alex Pietrangelo added goals as the Golden Knights won their fourth straight game.

Goaltender Marc-Andre Fleury made 20 saves for Vegas, which completed the season series with Los Angeles having won six of eight clashes.

It was also Fleury’s 485th career regular-season win, moving out of a tie with Ed Belfour and into sole possession of fourth on the all-time list. He trails only Martin Brodeur (691), Patrick Roy (551) and Roberto Luongo (489).

Trevor Moore scored both goals for the Kings, who lost their second straight. Goaltender Jonathan Quick surrendered three goals on eight shots in the first period before being pulled in favor of Calvin Petersen, who stopped 21 shots in relief.

Nosek opened the scoring with his fourth goal in seven games and the first of three the Golden Knights tallied in the first period. After being sprung on a rush, he blasted a shot from the wing at the 7:18 mark.

A minute after the midway point of the frame, Tuch made it 2-0 by rifling a top-shelf shot over Quick’s glove hand to net his 15th goal of the season.

After Moore netted his first of the night on the power-play thanks to a shot that ricocheted off a defender at the 13:38 mark, Pacioretty restored the Vegas two-goal edge with a lucky tally.

Pacioretty simply lifted a backhander from outside the blue line. The puck took a hop just before it reached Quick and bounced into the net for his team-high 21st goal of the season.

Stephenson made it a 4-1 affair when he wired a five-hole shot off the rush with 4:13 left in the second period, only to see Moore notch his second of the game late in the middle frame thanks to a partial breakaway created by a long pass from Adrian Kempe.

The Golden Knights kept pouring it on after the second intermission.

Stone extended the lead at the 5:28 mark of the third period when he took a drop pass from Pacioretty as he hit the slot and blasted a shot, and then Pietrangelo snapped a 12-game goal drought when his point shot deflected off a defender up and over Petersen to round out the scoring at 10:53 of the period.