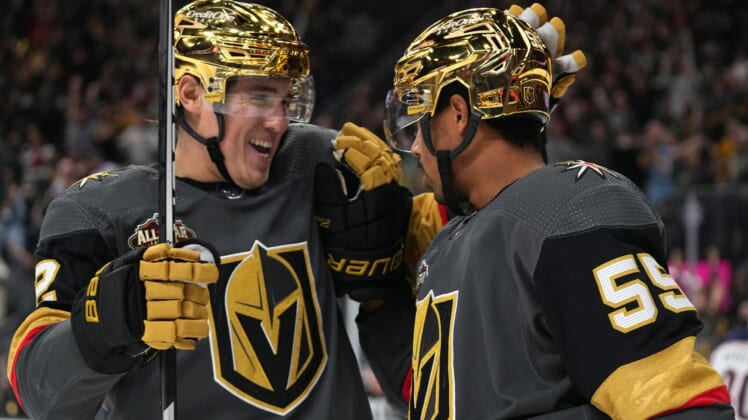 The Vegas Golden Knights finished their six-game homestand in the best way possible as they overcame a two-goal deficit to beat the Columbus Blue Jackets 3-2. After a tough first period where the Golden Knights looked shellshocked as the Blue Jackets dominated play, the home team managed to turn things around and were eventually rewarded with a regulation victory.

With this result, the Golden Knights conclude their six-game homestead with a 5-1-0 record, very impressive stuff for a team that struggled out of the gates. Doing that despite the continued absence of some of their best players is even more impressive.

“5-1 on a homestand when you are fully healthy is a great run.”, said head coach Peter DeBoer, “The group’s resiliency never wavered.”

The goalscorer for the Golden Knights tonight included Keegan Kolesar, Reilly Smith, and Mattias Janmark. It was the first goal of the season for both Kolesar and Janmark, and Smith’s goal came while they were shorthanded. He made a great defensive play to set himself up on a rush that he converted with a nifty move.

The game had a bit of a controversial finish as the game winning goal was challenged by the Blue Jackets. Janmark found the puck on his stick right in front of an empty net after Nicolas Hague had his stick break on his own shot attempt. After Janmark scored to make it 3-2, the Blue Jackets challenged the play as they thought it was offside.

The ruling came back that the play was onside and the goal stood, giving the Golden Knights the advantage that they needed to secure the two points. However, upon further review it does seem that a previous zone entry by the Golden Knights was offside. Because this was not the one that led to the goal, it was not under review and thus the referees made the right call.

This loophole in the video review rules helped the Golden Knights to victory despite the fact that they did go offside earlier in the play. While the Blue Jackets may not be thrilled about the result of their challenge — they took a two-minute penalty because it failed — it was the right call and the Golden Knights will take it anyway they can get it.

However, something changed during that first intermission and the Golden Knights looked like a brand new team for the rest of the game. They dominated the Blue Jackets and were constantly buzzing in the offensive zone, looking for open teammates to create scoring chances.

This was just yet another example of this team’s resiliency as they’ve shown the entire year that they are going to be a tough team to beat, no matter who is in the lineup. The Golden Knights finished the game with 35 shots compared to only 29 for the Blue Jackets despite being outshot 13-7 last night.

The Golden Knights play their next game on Monday against the St. Louis Blues on the road. The puck will drop for that game at 5 PM Pacific Time.