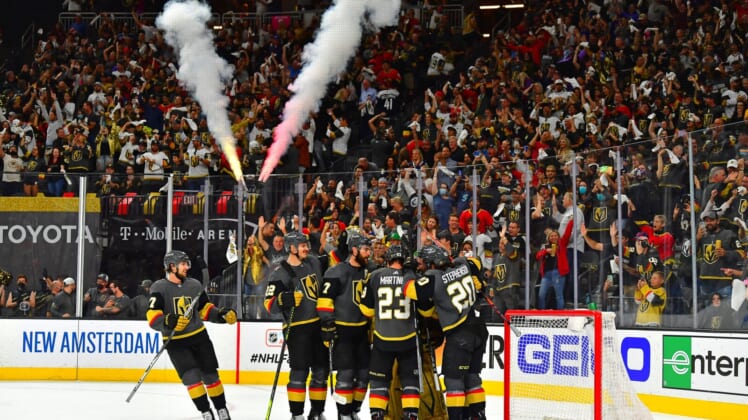 With five minutes left in the third period, things were looking bleak for the Vegas Golden Knights. They were down 2-1 to the Colorado Avalanche and facing a 3-0 series deficit, a hole that would be next to impossible to climb out of. The Golden Knights were playing for their season, and their effort paid off as they scored two quick goals to take a 3-2 lead, securing a crucial victory.

The Golden Knights now only trail 2-1 in this series and will have a chance to tie it up on Sunday. A playoff series doesn’t begin until a team loses at home and the Golden Knights made sure that tonight wasn’t going to be that night.

This five-minute stretch at the end of the game felt like a potential momentum shift for the entire series. The Golden Knights finally got a bit of puck luck and managed to put two goals up on the scoreboard in a short period of time, something that they have been incapable of so far.

This victory was only a small step in the grander plan of winning this series as the Golden Knights still need to win three of the next four games. Still, it was a big accomplishment for a team that has been looking for their first win in this round.

It was nice to see some of the Golden Knights good play finally reward them with a victory. That’s now five straight periods over the last two games where they have been the better team from an objective viewpoint. Keeping the faith that the puck will begin to bounce in their direction, the Golden Knights are in a solid spot to even things up at home before they try to steal one on the road.

After dominating the last two periods of Game 2, the Golden Knights brought that same momentum into Game 3 as they were the aggressors from the drop of the puck. Despite their intense pressure, they couldn’t find a way to score and were tied 1-1 after 40 minutes, a score that wasn’t very representative of how the game had gone.

Against a team as good as the Avalanche, it’s difficult to see those opportunities go to waste as it’s a given a strong team will turn the tide at some point. If you have no lead to show for your stretch of dominance, that can often be seen as a death sentence.

This was the theme of Game 2 and it reared its ugly head once again tonight. The Golden Knights controlled the play for the majority of the game but couldn’t score, eventually taking a penalty that leads to an Avalanche goal. While tonight they managed to pull out the win in the end, in the future the Golden Knights will want to convert on these chances.

Despite the lack of goals, the Golden Knights forwards have been doing a very good job of putting pucks on net and getting chances. These chances have not only been coming in high quantities, but many of them have also been of high quality and Avalanche goalie Philipp Grubauer has been forced to make spectacular saves.

The return of forward Max Pacioretty in Game 7 of the first round has been a big factor in the success of the Golden Knights. Not only has he been a steady presence on the first line, he has also afforded the team more depth as he has bumped the other wingers down the depth chart.

“He makes scoring goals look pretty easy and he scores them in different ways,” said captain Mark Stone after the game when discussing Pacioretty’s presence “he’s been huge for us.”.

It was Pacioretty that got his stick on a Nick Holden point shot for the game winning goal late in the third period, proving once again his value. Besides the goal, he was dangerous throughout the entire game as he created chances from a wide variety of areas on the ice.

Backs against the wall

The Golden Knights were looking at a 3-0 series deficit when they were down 2-1 with only five minutes left, meaning that they would need to win four consecutive games to advance to the next round. This is a feat that only four teams have ever pulled off across the entire history of the NHL.

Instead, two quick goals swung the momentum all the way back in the Golden Knights favor. This was a huge turn of events for a Golden Knights team that now enters Sunday’s game needing just one more win to even this series at two games apiece.

They will once again be playing in front of their home at T-Mobile Arena. The Fortress – as it’s known to Vegas fans – is holding over 18,000 fans at the moment and they clearly played a big role tonight with their energy and noise adding to the Golden Knights’ energy levels.

Game 4 starts at 5:30 PM PDT in Las Vegas on Sunday night. The Golden Knights will look to even the series up before it heads back to Denver.