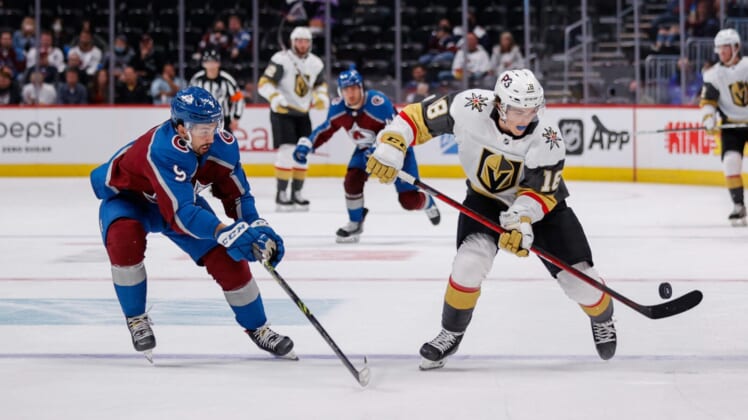 The Vegas Golden Knights continued their preseason journey with a game against the rival Colorado Avalanche on Tuesday night. While neither team was playing their best roster, there were still plenty of big names on the ice for this game. The Golden Knights emerged victorious after scoring a whopping seven goals led by defenseman Alec Martinez who got two of his own.

The offensive explosion was an encouraging sign for a Vegas team that has dealt with dry spells during crucial moments over the past few years. While all these preseason results should be taken with a grain of salt, scoring seven goals against another NHL franchise is an achievement that always calls for optimism.

With only two preseason games remaining, the Golden Knights are getting closer to the deadline to make their roster decisions. For players on the bubble of making the team, these games are their last chance to audition for those roles.

20-year-old Peyton Krebs had himself a big night as he scored one goal and picked up another three assists. It was a huge offensive performance for the former first-round pick who is trying to force his way onto the opening night roster.

“He was good,” commented head coach Peter DeBoer after the game. “He knows we’re coming down to the wire on decisions.”

Reports have come out that the Golden Knights have been refusing to add Krebs to a potential Jack Eichel trade and performances like last night’s show why. He has shown flashes of great offensive potential and the Golden Knights cannot afford to give up a cost-controlled asset.

The Alec Martinez – Alex Pietrangelo duo also had a big night as Martinez had a multi-goal game and Pietrangelo had two assists of his own. It’s an encouraging sign for the Golden Knights that their top defensemen are ready to hit the ground running once the regular season begins.

The Golden Knights really struggled on the penalty kill in this game as the Avalanche converted three of their four opportunities. When these two teams met last postseason, the Knights strong penalty kill was one of their reasons for victory.

While goalie Logan Thompson saved 30 of the 31 shots he faced at even strength, he saved only one of the four he faced while down a man. Playing better on the penalty kill will be something that will need to be addressed going forward.

The Golden Knights play their next game on Thursday night at home against the Arizona Coyotes. As we get closer to the first puck drop of the regular season, expect to see a more complete lineup filled with NHL players for the Golden Knights.

Despite their low expectations for this season, the Coyotes have won four of their five preseason games and have been giving teams a challenge. The Golden Knights will likely continue to give Krebs a large role to see if he’s ready to slide into the top-six full time.