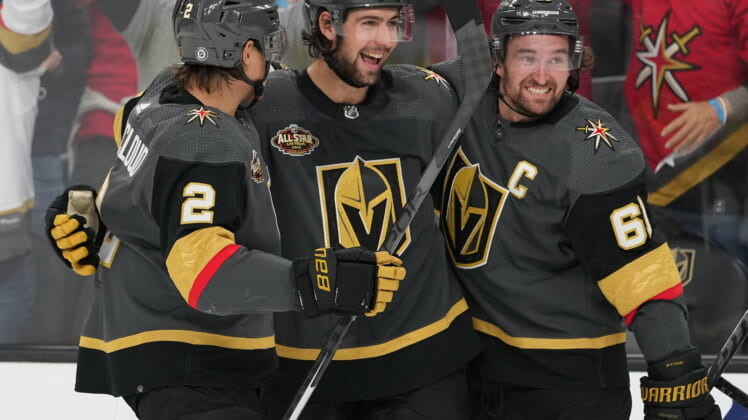 The Vegas Golden Knights defeated the Minnesota Wild by a score of 3-2 on Thursday night thanks to a pair of first ever NHL goals by two youngsters. Paul Cotter and Jonas Rondbjerg built the Golden Knights an early lead and the team shut things down from there, turning in one of the best efforts of the season so far. Jonathan Marchessault had the third goal of the game.

The Wild did make an attempt at a comeback in the third period but ultimately came up short.

Laurent Brossoit got the start in this one and he was exceptional for the large majority of the game, even if he didn’t have to face too many dangerous scoring chances. Still, he did his job and was more than serviceable on his way to his finest showing as a Golden Knight and his first win at home.

“It feels great.” said Brossoit in response to how he felt about winning in front of the fans, “It’s a loud, loud building.”

The Golden Knights have now played games against all three teams that they faced in the playoffs last season and they’ve won all of them. The revenge games have been a nice storyline thus far as they prove that they are still a formidable team even without their captain and other supporting pieces.

Alec Martinez left the game in the first period after getting hit by a skate blade in the face area. He has already missed time this season due to injury and now faces the possibility of more time sidelined, though the specifics on his status haven’t been released yet.

The Golden Knights’ special teams have ranged from average to awful this season, but tonight their penalty kill was exceptional. They killed all six of their penalties which kept the Wild quiet for most of the game and titled the scale in their favor.

This included a lengthy 5-on-3 near the end of the second period after the Golden Knights took a few delay of game penalties. This could have been a turning point in the game as a Wild goal would have cut the lead in half and brought them within one. Instead, the Golden Knights continued to build momentum as they stifled their opponent.

Brayden McNabb was a standout on the unit as he used his stick to get in passing lanes and make things difficult for the Wild. Nicolas Hague is another player who played a large role in the Wild’s struggles and deserves a mention for his play tonight.

A complete effort from start to finish

The Vegas Golden Knights’ lengthy home stand has gotten off to a great start as they’ve picked up all of the possible points so far. Thursday night’s game was especially impressive as the team turned in one of their best efforts of the season so far, controlling play from start to finish and dominating the Wild in all aspects of the game except for a portion of the third period.

As a team, the Golden Knights did a great job of neutralizing the Wild and their star players. Kevin Fiala and Kirill Kaprizov are both talented offensive players but both looked rather pedestrian tonight as the Golden Knights limited their scoring opportunities.

The Golden Knights finished the game controlling 60% of the expected goals and almost 70% of the high-danger scoring chances at 5-on-5. This dominance was especially evident in the first forty minutes.

The Golden Knights opened up a two goal first period lead thanks to a pair of nice goals from fourth liners Paul Cotter and Jonas Rondbjerg. It was both of their first goals in the NHL and their excitement was evident through the big celebrations. Not all first career goals are created equal and these two were especially nice as they both made nifty moves before beating Wild goalie Cam Talbot with well-placed shots.

Tonight is a game that neither player will ever forget and their goals weren’t only important for their resumes, they also were the driving force behind this Golden Knights victory. The Golden Knights would never relinquish the lead that these two youngsters built.

The Golden Knights play their next game on Saturday against the Vancouver Canucks. The puck drops for that game at 7 PM Pacific time at T-Mobile Arena.