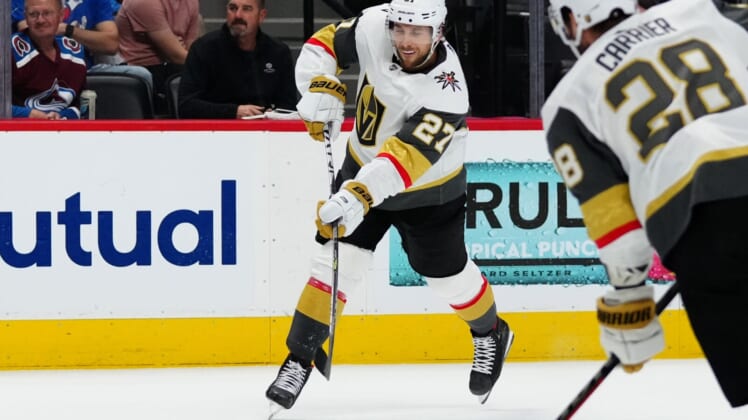 After a disappointing overtime loss in Game 2 against the Colorado Avalanche, the Vegas Golden Knights now get to come home to full-capacity T-Mobile Arena where they face a crucial Game 3. A loss tonight would give the Avalanche a 3-0 series lead, forcing the Golden Knights to attempt to pull off a reverse sweep that has only happened four times in NHL history.

The good news is that Game 2 offered many encouraging signs for a Golden Knights team that needed some after a brutal loss in Game 1. They outshot the Avalanche 41-25 and were the better team for the vast majority of the game. If it wasn’t for the spectacular play of Avalanche goalie Phillip Grubauer, the outcome might have been very different.

Alas, a penalty at the start of overtime led to the Avalanche stealing the win but the Golden Knights can be confident that they found a recipe for dominating at even-strength. That starts with taking away time and space from Colorado’s best players – namely Nathan Mackinnon, Mikko Rantanen, and Cale Makar. This was the biggest difference between the two games in Denver for the Golden Knights.

Both of the goalies expected to start tonight, Grubauer and Marc-Andre Fleury, are Vezina Trophy finalists and we saw last game that despite the offensive firepower on both sides, goals might not be as easy to come by as Game 1 suggested. A lower scoring game benefits the Golden Knights who will use their size to wear down the Avalanche over the course of this series in an attempt to clog up the ice.

Golden Knights do or die

While the Golden Knights were surely disappointed to lose both games in Denver, especially considering how well they played in Game 2, the saying goes that a playoff series doesn’t start until a team loses at home. It’s crucial that the Golden Knights defend home-ice and even this series up, else they will head back on the road where they will be facing an elimination game.

The Golden Knights proved in Round 1 that they could play with their backs against the wall, coming out in Game 7 against the Minnesota Wild and putting together a strong performance. They will need to do something similar tonight in Vegas and you can be sure that head coach Peter DeBoer will have his team ready to go.

Tonight is truly a must-win game for the Golden Knights. They have been great at bouncing back after losses this season and will look to do that once again against the President’s Trophy champions tonight in front of over 15,000 fans.

Avalanche goalie Phillip Grubauer has shown why he’s a Vezina Trophy nominee so far through this series. He’s stopped 63 of the 66 shots he’s faced thus far and many of them have been highlight reel quality. While the Golden Knights showed that they create chances last game, solving Grubauer will be crucial to winning these two games in Vegas.

The Avalanche have far too much offensive firepower to lose if the Golden Knights are only scoring two goals in a game. As we saw in Game 2, Colorado can have a pedestrian offensive performance and still end up with three goals because of their dangerous power play and elite talent.

The Golden Knights don’t have time for another game where they have all the chances but cannot score. While those may fly as moral victories during the regular season when you’re down 2-0 in a playoff series there is no time and you need to find a way to put pucks in the back of the net no matter what.

The puck drops tonight at 7 PM at T-Mobile Arena on the Las Vegas Strip. The Avalanche currently hold a 2-0 series lead, but the Golden Knights will look to cut into that deficit with a win tonight.