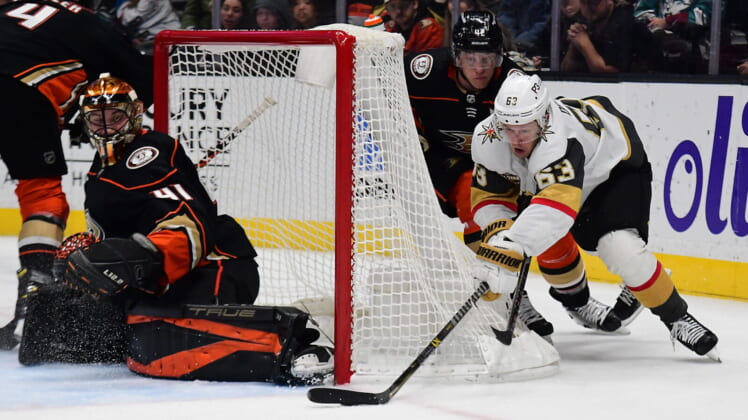 The Vegas Golden Knights just couldn’t quite find that final goal they needed to complete the comeback as they lost to the Anaheim Ducks 6-5. They had a power play late in the game down only one goal but they couldn’t get it before the Ducks managed to put one in the empty net.

It was a tough loss for a Golden Knights team that got all the scoring they needed but couldn’t stop a nosebleed. The game was tied 0-0 after the first period and seemed as if it might be a low-scoring affair until both teams exploded in the second twenty minutes.

“At the end of the night, when you score 4 or 5 goals, you should win,” said head coach Peter DeBoer.

The goalscorer for the Golden Knights included William Carrier, Zach Whitecloud, Mattias Janmark, Max Pacioretty, and Reilly Smith. Despite that balanced attack and a flurry of chances in the third period, they still couldn’t find enough to squeak even one point from this game.

The largest storyline of the early part of the Golden Knights season was the fact that their power play was atrocious. After a terrible start, the unit has started to click and against the Ducks the Golden Knights got goals from a huge variety of situations.

In fact, they were outscored 4-1 at 5-on-5 but still only lost the game by one goal. This marks a large turnaround for a Golden Knights team that has been waiting for their special teams to regain that sparkle. Continuing this momentum into future games will be key, especially in the playoffs when goals become hard to find.

The Golden Knights have been one of the worst teams this season at preventing scoring chances at 5-on-5. That issue reared its ugly head once again on Wednesday night as the Ducks were allowed too many prime scoring chances. The Ducks had 59.86% of the expected goals at 5-on-5 over the entirety of the game.

This is out of character for the Golden Knights as they’re usually quite solid in their own zone. While it’s true that former goalie Marc-Andre Fleury might’ve played a large part in their solid defensive numbers, the rate at which they’re allowing scoring chances this season has also skyrocketed.

This will be the next thing that the Golden Knights need to work on as they continue their ascension up the standings. Tonight they missed out on two points because of it.

The Golden Knights have been forced to deal with a boatload of injuries this season. Only in the past few weeks have they started to play with anything that resembles their normal roster. Despite that, they’ve shown a significant amount of resilience and managed to win games even without their stars.

There was a scary moment in Wednesday’s game when captain Mark Stone crashed into the end boards violently. It was a brutal collision and for a second it seemed as if Stone might be seriously injured. However, he returned to the game quickly and there were no signs of wear.

“He [Stone] came back and gutted it out.”, said head coach Peter DeBoer, “so we’ll see tomorrow what we’re dealing with.”

The Golden Knights play their next game on Friday night against the Arizona Coyotes. The puck drops for that game at 6:30 PM.