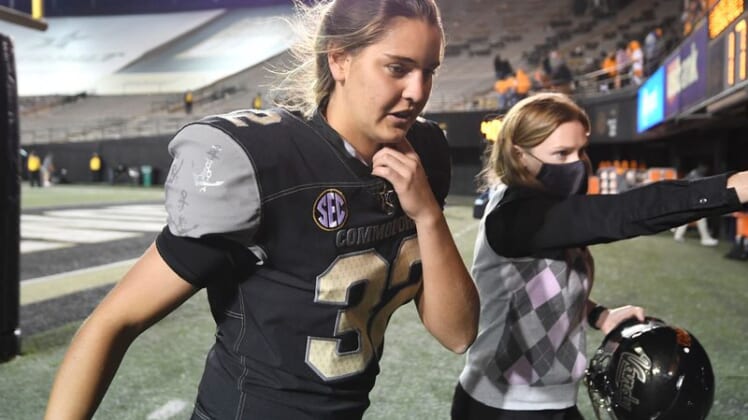 (Reuters) – Vanderbilt Commodores’ Sarah Fuller, who in November became the first woman to play in a Power 5 conference American football game, said she has been invited to attend U.S. President-elect Joe Biden’s inauguration on Wednesday.

Fuller, who is a goalkeeper for Vanderbilt University women’s soccer team, said it was an honour to be invited to one of “America’s greatest traditions”.

“This historic inauguration is especially meaningful for American women and girls,” she said on Twitter. “The glass ceilings are breaking and it is the time to #LeadLikeAWoman.”

As well as Biden, she tagged Kamala Harris — who is the first female Vice President-elect — in the tweet.

Fuller delivered the opening kick of the second half for Vanderbilt against Missouri Tigers on Nov. 28. She took the field as place kicker in the third quarter and sent a low kick to the 35-yard line.

Fuller had made the trip with the men’s team to Missouri after several members of the squad were put in quarantine over COVID-19 health and safety protocols.

No woman had appeared in an SEC game or the Power 5, a group of college football’s largest conferences.

(Reporting by Shrivathsa Sridhar in Bengaluru; Editing by Peter Rutherford)